Moon’s Early Magnetic Field Might Be Responsible for Life on Earth. Here's Why

Recent research shows that our natural satellite once had a magnetic field that helped protect our homeworld from damaging solar radiation during a crucial early era. The Moon also played an immense role in the evolution of life on Earth.

According to the NASA-led research published in the journal Science Advances, the mutual magnetic field condition, with the Earth and Moon magnetospheres joined, may have lasted from 4.1 to 3.5 billion years ago.

"The Moon seems to have presented a substantial protective barrier against the solar wind for the Earth, which was critical to Earth's ability to maintain its atmosphere during this time," said Jim Green, NASA's chief scientist and lead author of the new study.

"We look forward to following up on these findings when NASA sends astronauts to the Moon through the Artemis program, which will return critical samples of the lunar South Pole." 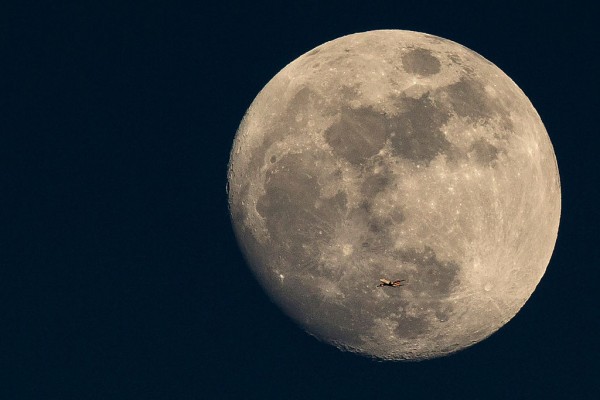 (Photo: Dan Kitwood/Getty Images)
LONDON, ENGLAND - MARCH 03: A plane flies past the moon at sunset on March 3, 2015, in London, England.

Scientists have long learned about the Earth's magnetic field that induces the brilliantly illuminated aurorae in the Arctic and Antarctic regions. Scientists pointed out that the Moon once had a magnetosphere, too, due to analyses of lunar surface samples from the Apollo missions.

The new research replicated how the Earth and Moon's magnetic fields behaved around four billion years ago. To look at the magnetic fields' behavior at two locations in their respective orbits, scientists developed a computer model.

The magnetosphere of the Moon may have acted at some moments as a foil against the harsh solar radiation pouring down upon the Earth-Moon system, the scientists wrote. That's how the Moon and Earth's magnetospheres must have been magnetically related in each object's polar regions, according to the model.

The high-energy solar wind particles could not fully penetrate the coupled magnetic field and strip away the atmosphere, especially for Earth's evolution.

But there was also a sort of atmospheric trade. The strong ultraviolet radiation of the Sun may have removed electrons from the uppermost atmosphere of the Earth's neutral particles, making those particles charged and allowing them to travel along the lunar magnetic field lines to the Surface.

"It tells us about what the Moon's core could have been like -- probably a combination of both liquid and solid metal at some point in its history," Draper explained. He said the recent finding is "a very important piece" of the puzzle for how the Moon works on the inside.

Over time, our closest neighbor lost the magnetosphere and, consequently, the atmosphere, as the Moon's interior cooled.

The solar wind was stripping the Earth apart without a gravitational field. This is also the reason why Mars lost its atmosphere: it was washed away by solar radiation.

Suppose our Moon played a role in protecting our world from harmful radiation during a crucial early phase, perhaps in a similar way. In that case, there might be other moons in the galaxies around terrestrial exoplanets that help maintain atmospheres for their host planets and even contribute to living conditions, scientists said.

Check out more news and information on Magnetic Fields in Science Times.

Does the Human Brain React to Earth's Magnetic Field?

Uranus, a Weird Planet, Has a Weird Magnetic Field