New Species of Rays in Japan Named After Vengeful Spirit

Since the Kagoshima City Aquarium in Kyushu, Japan opened in 1997, the aquarium rays were already known as giant guitarfish. However, they have rounder heads and dorsal fins.

But 23 years later, researchers believe that these giant guitarfish could be a new species of rays, which they named as Rhynchobatus mononoke, from a vengeful spirit in folklore.

The rays were a popular attraction at the Kuroshio Great Water Tank, but they do not attract too much attention and spend most of their time at the lake's bottom. This is the first new species in Japan after a decade, according to MailOnline. 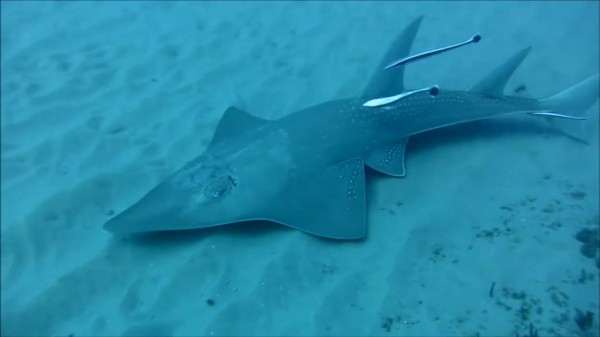 Giant guitarfish are considered an endangered species by the International Union for Conservation of Nature (IUCN), and these species can grow up to eight feet. They look like a shark but also shares some attributes with the stingray.

However, when Keita Koeda of the Kuroshio Biological Research Institute compared the photos of the rays in the Kagoshima City Aquarium from the pictures of the giant guitarfish in the waters near Satsumasendai, he observed that they differ in the shape of the heads and dorsal fins, which is rounder for the aquarium rays, the Asahi Shinbun reported.

Moreover, the aquarium rays display large black spots near the center of their pectoral fins. After working with the institute and Kagoshima University Museum, the aquarium finally determined that the rays were part of an undiscovered species.

The newly discovered rays are named Rhynchobatus Mononoke due to its triangular head that resembles a vengeful spirit in folklore known as the mononoke. This ghost wears a hood seen from behind.

According to Koeda, it seems that Rhynchobatus mononoke is endemic in southern Japan. But this is the first time a new species is identified in Japan for over a decade.

There are approximately 630 different species of rays and skates around the world, which is categorized into 16 families.

The discovery of a new species in the Japanese aquarium for over 23 years proves that the waters near Kagoshima are rich with wildlife, including those that are yet to be discovered, says Akihiko Yoshida in an interview with Japan Times.

A giant guitarfish is commonly seen in the Eastern Indian Ocean and Western Pacific Ocean, where it can be seen in India, Australia, Papua New Guinea, the Solomon Islands, and the northern part of Taiwan, according to the Asian Species Action Partnership.

The IUCN has classified giant guitarfish as one of the many species considered to be endangered. To protect them, countries like Australia have already imposed a finning ban on the guitarfish or the removal of fins and discarding the fish's body at sea.

Also, some areas in the country like Queensland and Northern Territory have limited these species' recreational possession.

Check out more news and information on Fish on Science Times.