The Moon's recent discoveries indicate that lunar water could be more available than initially believed. The new data is incredibly exciting to NASA. They hope to use the Moon's resources, particularly water ice embedded in the soil, to help potential astronauts live and function on the lunar surface.

Researchers found water directly on the lunar surface in one study, discovering the molecule in regions of the Sun-lit Moon. The second research speculates that water ice may be trapped in tiny pockets or tiny craters scattered all over the surface of the Moon, theoretically rendering water more plentiful and available than we could ever expect. The two scientific findings were published in the journal Nature today. 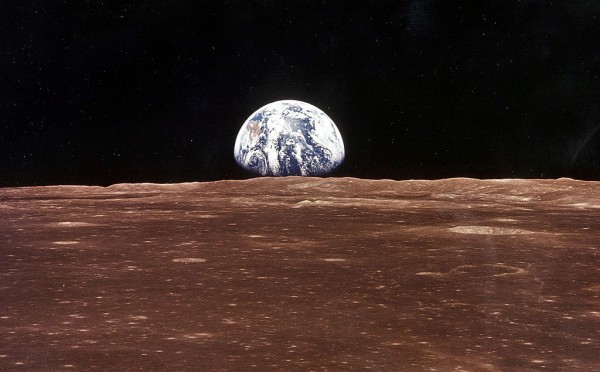 (Photo : NASA/Newsmakers)
376713 11: (FILE PHOTO) A view of the Earth appears over the Lunar horizon as the Apollo 11 Command Module comes into view of the Moon before Astronatus Neil Armstrong and Edwin Aldrin Jr. leave in the Lunar Module, Eagle, to become the first men to walk on the Moon's surface. The 30th anniversary of the Apollo 11 Moon mission is celebrated July 20, 1999.

This isn't the first time the water on the Moon has been observed. But the only water that we have been able to locate and check so far is very challenging to access. It tends to be mainly found in large craters in permanent shadow at the lunar south pole. The frigid craters are dangerously cold, perhaps approaching -400 degrees Fahrenheit, rendering advanced technologies virtually tricky for them to enter. Paul Hayne, a planetary scientist at the University of Colorado and a lead author of one of the Nature reports, tells The Verge, "They tend to be the coldest documented positions in the Solar System, believe it or not."

The study released today poses the likelihood that explorers will encounter water that is much less lethal in other parts of the Moon. "If we find that it's abundant enough in certain locations, it would be easier to access versus going into these [icy], very dark places," Casey Honniball, a postdoctoral fellow at NASA's Goddard Space Flight Center and lead author on one of the studies, tells The Verge.

An enticing idea for those planning to place a base or village on the lunar surface is to remove water ice from the Moon. Lunar water may be used as drinking water or as hydration for plants, whether it's filtered. Water can also be divided into its fundamental elements, hydrogen, and oxygen, and transformed into rocket fuel. Sending materials to the Moon requires many resources, time, and money, but if astronauts might use what's already out there, it will cut back on shipping from Earth and help the astronauts support themselves.

NASA has been firmly concentrating on sending humans to the Moon with its Artemis initiative for the past two years, with the organization emphasizing' sustainability' as the ultimate target. NASA has often been very outspoken regarding extracting some water ice available on the Moon to fund the project. NASA Administrator Jim Bridenstine also says that we know there are "hundreds of billions of tons of water ice on the surface of the Earth."

The reality is, we don't know. What we have are figures focused on the last couple of decades of a few detections. As evidence from India's Chandrayaan-1 mission revealed signs of water-like molecules at the lunar south pole, the first global proof of water came in 2008. NASA later deployed an LCROSS spacecraft that rammed into the Moon in 2009, stirring up material and proving that there was water in any sort. And in 2018, researchers uncovered direct signs of water ice at the poles using data from the same spacecraft. But finally, we only have specific thoughts on how much water might be up there, nothing conclusive. We have no clue what luna ice looks like. Is it spread uniformly in the lunar soil, or is it clumped in big chunks together?

These recent experiments don't offer a definitive response, either. But they indicate that water does occur in places that won't harm humans. Honniball and her colleagues flew the NASA SOFIA observatory, a Boeing 747 fitted with telescopes and equipment to research phenomena in the Universe, to discover this water. The data from SOFIA allowed Honniball to locate real molecular water on the sunny surfaces of the Moon. Its survival came as a treat. "We didn't realize that when it is illuminated, water will live on the surface of the Moon," she says. Honniball speculates that the molecules of water are integrated into dark lunar objects and grains frequently present on the surface of the Moon.

The second analysis did not explicitly observe water but showed that mini-craters or tiny shadowed areas mark the Moon's floor. The researchers conclude these remote regions are cold enough to store lunar ice after carefully studying these areas using photographs captured by NASA's Lunar Reconnaissance Orbiter. These are tiny and convenient for astronauts to enter, unlike the massive craters at the south pole.

"There are billions and billions of them, which means that you could land in an area that is lit by the Sun, and then bend over or get down on your hands and knees and extract samples from these micro-cold traps," says Hayne. He and his colleagues estimate that the Moon's 40,000 square kilometers (about 15,400 square miles) will trap water in this manner.

Check out more news and information about space in Science Times.