How Hot Is Your Chili Pepper? Let This New Portable Device Detect It

Can you tell how hot your chili pepper is? A new chili-shaped device can rapidly signal if adding the pepper to your food might set your mouth burning.

Known as the "Chilica-pod," this device could detect capsaicin, a chemical compound that helps provide pepper with their occasionally "painful kick."

Overall, the more capsaicin a pepper contains, the spicier it tastes. According to a report from the researchers in the October 23 ACS Applied Nano Materials, "The Chilica-pod is sensitive" and has the ability to detect extremely low fiery molecule levels.

He explained that people who are allergic to capsaicin could use the device to avoid the compound. Farmers could also test their harvested peppers to specify better how spicy they are. 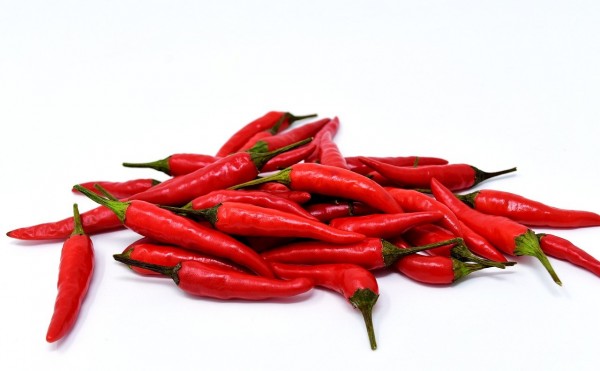 (Photo : Alexas_Fotos on Pixabay)
A new chili-shaped device can rapidly signal if adding the pepper to your food might set your mouth burning.

The relative spiciness of a pepper is usually conveyed in Sconville heat units, described as "imperfect measurement," which a group of human taste testers determines.

Other more accurate approaches for identifying a pepper's spiciness are time-sensitive, not to mention, involve costly equipment, making the procedures unsuitable for immediate answer.

Here comes Chilica-pod, a smartphone-compatible device. Developed by Limbut and colleagues, described their gadget's sensor as "composed of stacks of graphene sheets."

This device works by being plugged into the USB-C port of a smartphone and is fitted with paper-based sensors that are replaceable and can read chili samples mixed with ethanol.

The device's developer explained further that "when a drop of chili pepper and ethanol solution is added to the sensor, the capsaicin" coming from the pepper stimulates the electrons' movement among the graphene atoms. The more capsaicin the solution contains, the stronger electrical current occurs through its sheets.

The Chilica-pod then records the electrical activity. As soon as its 'stem' gets plugged into a smartphone, the device sends the information to an app for evaluation.

One test showed that this gadget can determine levels of capsaicin as low as 0.37 micromoles per liter of solution, equivalent to the quantity in a pepper without heat.

Limbut and colleagues used the device to measure six dried peppers individually. As a result, the team found that the capsaicin concentrations of the said peppers "ranged from 7.5 to 90 micromoles per liter of solution."

When conveyed in Scoville heat units, that particular range corresponds to the peppers' spice like cayenne or serrano, which are mild varieties compared to one of the hottest peppers of the world, also known as the "hot Carolina reaper."

A plant geneticist and chili breeder at New Mexico State University in Las Cruces, Paul Bosland, noted that capsaicin is only one of at least 24 related compounds that provide heat to the peppers.

Boslan, who was not part of the study also said, he would hope that the Chilica-pod device "could read them all."

Possibly, when the technology gets commercialized, the developers said it could help identify the ferocity of chili species with similar appearance though pack different levels of punch.

Check out more news and information on Capsaicin in Science Times.