Reports on this latest development indicate that such models can be used to replace animal models to better predict clinical results. Considering the urgency of the pandemic, the company has made the models available to teams working on vaccines for COVID-19.

The result is a 23-millimeter 'button' of skin kept alive in a culture for roughly seven days and can be used for study purposes.

Genoskin, although more known in the cosmetics industry, its potential to support and fast-track drug research and development or R&D specifically for vaccines and other injectable products have also been recognized in the pharmaceutical and biotech industry. 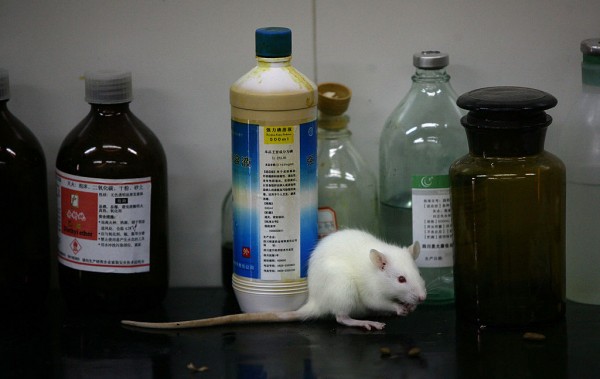 (Photo : China Photos/Getty Images)
Over 100,000 rats and mice are used in experiments every year for pharmaceutical research in the lab, where the temperature is kept at 24 degrees centigrade.

Human, Instead of Animal Testing

According to Eric Merle, Genoskin's chief commercial officer, as the said products "are immunocompetent and therefore," they exhibit immune responses, they can utilize a replacement for skin of animal models "that are still the norm for the pre-clinical" phases of R&D in the pharmaceutical industry.

Merle also notes that, as well as being more ethical, the models of Genoskin "are actually clinically superior to animal models." Not only do most of them have different structure compared to humans, their immune responses or immunology are divergent, as well, he explained.

In connection to this, a lot of research has been made in recent years, presenting that animals have serious constraints as models for examining human disease.

Instead, the ex vivo skin of Genoskin enables pharma scientists to collect human data, the so-called "holy grail" for developing drugs, earlier and prior to the study of the drug in real humans.

Su, argued Merle, the models used by Genoskin act as a "de-risking tool," on top of being an accelerant. This is essential given that nine in 10 drugs are unsuccessful tests, despite succeeding in pre-clinical studies in animals.

Models' Ability to Replace Some Initial Steps in Clinical Trials

Merle also contended that by better predicting the response of humans to drugs and vaccines, the models of Genoskin could replace some of the initial steps, too, of clinical trials. As a result, those tests don't have to be so big, long, and costly.

Genoskin has worked with big pharmaceutical firms, small biotechs, as well as academic researchers on its skin models. Specifically, it has worked with Sanofi on the reactions to the "subcutaneous injection of adalimumab," a drug designated for different autoimmune conditions, in a skin model, producing psoriatic lesions.

The company has also collaborated with Clariant chemicals company to investigate "mitigating skin 'inflammaging'" by preventing the NLRPE inflammasome and NFkb pathways. It has also worked with Harvard University on mapping distributions of both metal and metal oxide in ex vivo skin.

The academe and the industry are not the only stakeholders in the pharmaceutical field to express interest in Genoskin. Recently, the company also met with regulators in both the United States and Europe, which are interested in shifting from animal testing to the probabilities of other alternatives.