Just recently, Pfizer, Inc. announced more than 90 percent efficacy of its COVID-19 vaccine. Now, one of those who volunteered to participate in the trial is sharing his experience with the shots, specifically the side effects.

Giora Griffel, a Princeton, New Jersey resident, is one of the more than 40,000 volunteers in the phase three trial for a frontrunner vaccine for COVID-19 of Pfizer.

He decided to take part in the trial after his wife, a Mt. Sinai Health System researcher, put him in touch with the doctors who were behind the huge and critical trial phase.

In an exclusive interview with Cheddar, Griffel shared he "immediately jumped on it" when he was offered the opportunity. 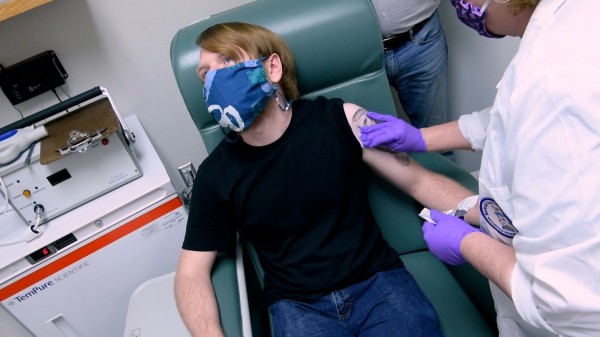 (Photo : Pfizer/Handout via REUTERS)
A vaccine trial participant is prepared to test COVID-19vaccine candidate BNT162b2, developed by Pfizer and BioNTech, at the Center for Vaccine Development and Global Health at the University of Maryland School of Medicine in Baltimore, Maryland, US.

Pfizer's announced that the vaccine has more than 90-percent effectiveness, and this generated optimism among Americans, as well as Investors, for that matter, that a COVID-19 cure may be on its way.

As for any apprehensions about being among the first to try Griffel told Cheddar, he trusted the process saying, "I understood the science behind it."

Also, during the interview, the man from New Jersey added, he was, in fact, excited to, perhaps, get a real vaccine and be protected.

"And, of course," he continued, "You think about the fact that you join an amazing effort" for COVID-19 treatment, as quickly as possible.

The study gave volunteers a 50-50 chance of receiving either saline water or the actual vaccine, which, at that point, had already been tried on thousands of individuals.

In terms of side effects, both Griffel and his wife had slight flu symptoms right after each of the two shots they were given over the month of August.

Following the first shot, Griffel said he felt okay, but his wife had some fever that went away a day after. After the second shot, the experience was the opposite-his wife felt a little sick while he was a bit more severe. Aside from the side effects, though, he said he is confident that Pfizer's vaccine is safe, and he is quite comfortable about it.

In addition, according to the volunteer, Pfizer would not verify if what they were given was the actual vaccine or the saline water. Still, he and his wife were able to confirm independently through blood tests that they had the antibodies.

Generally, Griffel advises others to get the vaccine as soon as they can as they'd be able to protect themselves, their surroundings, and even the world.

Major Victory in Fight Against COVID-19

Earlier his week, Reuters reported Pfizer said this experimental vaccine is a major triumph in combatting the COVID-19 that has claimed the lives of more than 1.3 million people globally, not to mention crashed the world's economy.

The report also said, those behind the mitigation of this killer disease like the scientists, health professionals, and public officials, among others, welcome such a pioneering successful provisional data from an extensive clinical test that can help turn the tide of this global health crisis especially when the trial results reach their completion.