Social insects such as hornets and honeybees develop from wasps and solitary bees, respectively. According to experts, a typical trait of many social insects is age-specific behavior that when they develop from pupa, workers usually specialize in "around-the-clock" tasks" inside the darkness of their nest, beginning with brood care.

However, these insects gradually change towards more cyclic works away from the nest's center as they get older, "culminating in foraging outside" solely in daylight, towards their life's end.

Here, scientists find evidence that such a shift from around-the-clock to cyclic tasks, which does not take place in solitary insects, appears to be driven by a slower development of the so-called "endogenous circadian clock" of social honeybees, compared to solitary bees.

As a result, the scientists found that solitary red mason bee, Osmia bicornis, where females of all ages forage to provide food for their offspring, females and males arise with a mature, completely functional circadian clock as presented exhibited in their 24-hour movement, as well as the activity of the brain cells that generate the "pacemaker" protein PDF or Pigment-Dispersing Factor. 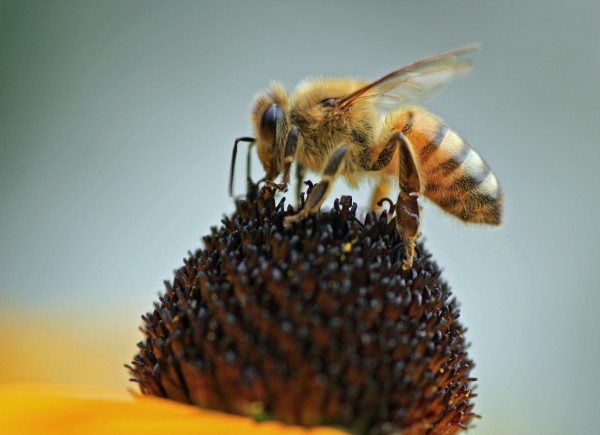 (Photo : 272447 on Pixabay)
Research found that the circadian clock’s maturation is delayed in social honeybees, compared to the solitary mason bees.

Delayed Maturation of the Circadian Clock

Researchers also said their findings specified that the circadian clock's maturation is delayed in social honeybees, compared to the solitary mason bees.

Therefore, they added, they predict that quick maturation of the circadian clock is the ancestral condition and is likely to be found throughout both the wasps and solitary bees, which all need to hunt and perform offspring care within their lifespan.

On the contrary, according to postdoctoral scientist Dr. Katharina Beer, from the Department of Animal Ecology and Tropical Biology of the Julius Maximilian Universitaet Wuerzburg, Germany, a maturation delay may have developed secondarily in social species, to allow age-associated behavioral changes from "acyclic offspring care to everyday foraging."

Her research, conducted with Chair of Neurobiology and Genetics at Julius Maximilian University, Professor Charlotte Helfrich-Foerster, is published in Frontiers in Cell and Developmental Biology open-access journal.

The red mason bee is an essential pollinator used for agriculture throughout Europe, North Africa, and Near East.

It is different from social insects, as indicated in the study, "There is no infertile worker caste: female overwinters in their natal nest to arise in the spring, mate and build new nests in hollow stems."

Furthermore, females hunt on various plant species for nectar and pollen, which they store inside sealed cells, laying one egg each cell.

Beer and Helfrich-Forester gathered newly-arisen bees, 40 females in particular, from isolated brood combs of honeybees or Apis mellifera, and 56 females and 31 males from secluded "pupal cocoons of O.bicornis, and place these inside detached tubes inside a Locomotor Activity Monitor system, a device for registering individual's activity.

In this study, the investigators concluded that the circadian pacemaker is fully mature in newly-arisen O.bicornis. However, it needs to develop to be fully active honeybees, which explains why young honeybees are not yet showing a circadian rhythm.

Such a delay in maturation is possibly an evolutionary adaptation to sociality where young bees do need to be involved in "around-the-clock" care of their undeveloped siblings.

According to Helfrich-Foerster, it will be most interesting for them to conduct similar research on other social insects like ants, which have different forms of social behavior.

Some exhibit age-related behavior as in honeybees, while others do not. Therefore, the expert concluded that if they find similar differences in endogenous clock's maturation associated with the different social structures of the ant species, this then will strongly back their hypothesis.

Check out more news and information on Honeybees on Science Times.