Any of human history's biggest travels was the product of our unquenchable desire for discovery. We tried to stretch the boundaries as our technologies progressed by flinging space probes beyond the heliosphere of our solar system and even riding a rocket so we could stroll on the Moon.

This eagerness for discovery seems to have placed us on the verge of an entirely new period, one that many claims would be gilded by the first trillionaires: the space mining period. However, with the increasing interest in extractable resources on the Moon, an international team of scientists has recognized a problem.

"A lot of people think of space as a place of peace and harmony between nations. The problem is there's no law to regulate who gets to use the resources, and there are a significant number of space agencies and others in the private sector that aim to land on the Moon within the next five years," said Martin Elvis, an astronomer at the Center for Astrophysics | Harvard & Smithsonian and the lead author on the paper. "We looked at all the maps of the Moon we could find and found that not very many places had resources of interest, and those that did were very small. That creates a lot of room for conflict over certain resources."

Experts uploaded their paper in the Philosophical Transactions of the Royal Society A. 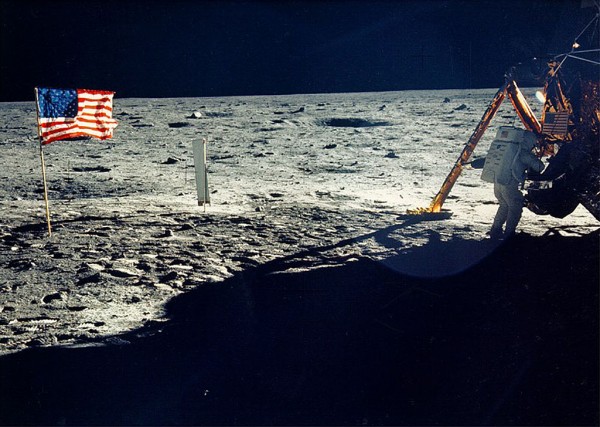 (Photo : NASA/Newsmakers)
376713 16: (FILE PHOTO) One of the few photographs of Neil Armstrong on the moon shows him working on his space craft on the lunar surface. The 30th anniversary of the Apollo 11 Moon landing mission is celebrated July 20, 1999.

It is important to take a moment and speak about the non-monetary costs of an increasingly imminent space rush at the edge of this modern century, which starts at a period when humans are only coming to grips with the long-awaited implications of the colonial period of global expansion.

In the solar system, remote rocky worlds entice growth with the lure of mineral reserves. And with the primary consideration about how to exploit the surplus of precious energy the solar system holds off Earth, a whole industry has already started to materialize. The space mining laws, though, are also very ambiguous at best.

However, history has already provided us with several glimpses of what the extension could look like.

Take, for instance, California, a famous American gold rush location. John Sutter, the lord of the property where the first gold flecks were spotted, died as a pauper. The industrialists and traders were the ones who minted the greatest money. Many that profited from spades were not the ones who were busy coaxing gold from the land; they were the ones who actually sold the spades. Levi Strauss marketed denim jeans to miners, and Sam Brannan peddled shovels, pickaxes, and mining pots, and the Hearst family wealth was built on silver mine real estate. And of course, when the railroads internalized the melee, a massive transit sector developed.

The space race would see outfitters and transporters pushing growth and investment in the solar system, much as the gold rush. Elon Musk is leading the pack precisely because he discovered that his company, SpaceX, would be able to serve as an intermediary with the capital barrier to entry into space, and the public embraced his vision to the tune of some $36 billion. Other corporations' presence, funded by investment funds such as Starbridge Venture Capital, indicates that both the cash costs and the manufacturing subsidies for those costs appear guaranteed.

The next challenge we have to face, though, is more complicated: how can we mitigate the research costs of the current sprint into space?

As a method, research promises theories for natural events that are straightforward, objective, and mechanistic. Yet almost by necessity, such a dispassionate, impartial scheme struggles to pay its own way. For this cause, to continue breaking limits, research would still rely on the sponsorship of private and public funds, ensuring potential conflicts of interest will occur. And since this is obviously going to be the case in space, we have to contend with how those disputes are going to be officially mediated.

Consider the future creation of Mars, for example. Although we cannot exactly take the word of Elon Musk for what the future brings, the enigmatic creator made no secret of his intention of constructing an off-world base. It is an ambitious goal, as a healthy multi-planetary society guarantees a back-up copy of the life of our world, maintaining at least a fraction of the biodiversity of the Earth (including ourselves) in the case of a sudden gamma-ray explosion, meteor strike, or disastrous orbital change. He recently explained his desire to make life multi-planetary to ensure its continuation." And while it is far from clear that all of these world-killer scenarios would exist in the immediate future, fortune favors all who are planning for all eventualities.

Around the same time, it could prove catastrophic for scientific knowledge of new worlds to step so rapidly into extraterrestrial bases. For example, if we inadvertently add biological pollution to another world, our hopes of discovering how life first evolved, there could be jeopardized.

A Deep Biosphere on Earth has also been unearthed by recent work, reaching thousands of miles below the soil. Microbes are slowly emerging here, fueled by chemical reactions between basic substances, such as hydrogen and carbon dioxide. In reality, the biochemical systems of bacteria that survive in these depths are so old that some have come to the belief that they may be echoes of Earth's earliest existence, a glimpse into the distant past.

The finding of a deep terrestrial biosphere, almost totally separated from surface environments, has once again prompted several scientists to fan the fires of the extraterrestrial existence hypothesis. What if there were more than mere signs of past life on Mars? What if the survivors of the ancient Martian biosphere were far under the surface? It's a tantalizing idea that might help resolve a looming query regarding life's origins: did it originate and migrate to other planets on Earth? Or is there a second tree of existence, which began on Mars under unusual circumstances?

The challenge of unregulated economic development is that seeking a solution could be forever postponed. Any sort of base on either the surface of Mars or the surface of the Moon, especially if we wanted to dig down into the depths to search for resources such as hydrogen, sulfur, and water, will risk having an inadvertent encounter between two planetary biospheres, perhaps obscuring their separate histories. In the worse case situation, this might jeopardize the survival of one or all plants. And irreparable harm to priceless organisms or fossils may occur, at the very least.

Fortunately, the brightest minds of our age are now grappling with the need to preserve off-world locations for science exploration. Joalda Morancy, an early career student in Astronomy and Geophysics at the University of Chicago and the National Director of Operations for Space Exploration and Production Students indicates that it might be important to create a hierarchical framework of transparency between technologists and scientists. Morancy points out that a robust system of checks and balances that prevents unethical behavior would require an effective space treaty."

Given the diplomatic challenges to the exploration of space, before going on with space mining and other celestial industries, a formal space deal will need to be decided upon by the countries of the planet. And it will need to raise the bar and reach of such an arrangement higher than prior attempts.

Governmental negotiations involving the discovery of other planets, most specifically the Outer Space Treaty of 1976 or the Artemis Accords have some precedence. Yet these amount to nothing more than pacts of non-aggression. By announcing the intrinsic threats to science and terrestrial existence that go with visiting other planets, the COSPAR convention got closer to what is needed. Such papers, though, are currently simply guidelines to governments and businesses. There are no existing means to implement the rules.

While a modern and wide-ranging new space treaty seems a requirement, Morancy also warns that the problems of science denialism, structural racism, and political cleavages that plague us on Earth will not be solved by space exploration. Many, however, remain hopeful that it would enable society to flourish and evolve as a whole by seeking common ground between science and industry.

As NASA's Chief Historian Stephen J. Dick says, "For the most basic of reasons, we should undertake[exploration]-our self-preservation as a creative, as opposed to a stagnant, society." Space exploration thus helps us to realize a political future where multipolar interests propel the automobile along a path that has yet to be claimed. Yet, there is no solution to the issue of how to bring diverse, opposing parties to collaborate.