The World Health Organisation (WHO) said Monday that progress in reducing malaria has slowed down in recent years. The agency had recorded more than 400,000 people reported to have died last year from the disease once again.

The health organization reported in its World Malaria Report 2020 that progress against mosquito-borne diseases has increased. African countries had the highest number of cases and deaths.

The global tally of malaria infections was reported at 229 million in 2019, a number that has been at the same pace for the past four years.

Meanwhile, in the last two years, the once rapidly-falling death rate has practically come to a standstill.

"A better targeting of interventions, new tools and increased funding are needed to change the global trajectory of the disease and reach internationally-agreed targets," the WHO said in a statement. 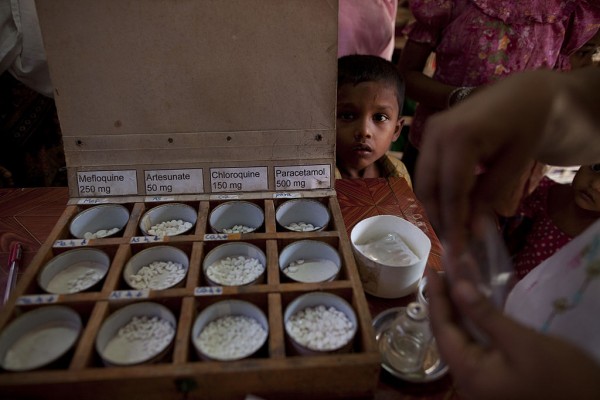 (Photo : Paula Bronstein/Getty Images)
SITTWE MYANMAR - MAY 4: A Rohingya boy watches as malaria medicine is given out to patients at special clinic for malaria on May 4, 2009 in Sittwe, Arakan state, Myanmar (Burma). The majority of the patients treated belong to the Rohingya Muslim minority who live in Muslim neighborhoods in Sittwe. The situation of Rohingyas in Arakan has become worse after the international media began highlighting since December 2008 the Rohingya boat peoples' plight who are subject to severe restrictions of movement by the government, religious persecution, and extortion. The Rohingya are physically, linguistically and culturally similar to South Asians, especially Chittagonian people from Bangladesh. The Burmese government spends only 0.3% of the gross domestic product on health, the lowest amount worldwide, according to the United Nations Development Program 2008 survey (UNDP). Malaria, a disease that is relatively easy to treat is one of the number one killers in Burma due to a lack of good and affordable diagnosis and drugs. At a clinic, in the capitol city of Arakan state run by an aid organization, over 220,000 cases of malaria were treated over the last year with the number of cases doubling in the monsoon season. Many low income people living in the poverty-stricken rural areas can't even afford to have a meal in a day. The poor suffers the most in Burma since they can't afford to pay for healthcare.

The UN health agency stated a budget deficit faced a "significant threat" with just $3 billion of a $5.6 billion goal raised in 2019.

WHO added that the funding shortages have led to critical gaps in access to proven malaria control tools.

Countries have lately started to implement customized responses, focused on local data and information, rather than a uniform strategy, to continue to pressure malaria.

Africa accounts for more than 90 percent of the epidemic burden. The continent last year accounted for an unprecedented 384,000 deaths from malaria.

"It is time for leaders across Africa -- and the world -- to rise once again to the challenge of malaria," said WHO director-general Tedros Adhanom Ghebreyesus.

"Through joint action, and a commitment to leaving no one behind, we can achieve our shared vision of a world free of malaria," the former Ethiopian health minister said.

Four countries accounted for almost half of all instances of malaria worldwide in 2019:

The WHO study showed that several malaria preventive efforts went on without significant delays despite the whole coronavirus pandemic.

But there were fears that attempts to combat the diseases' flatlining could hinder more gains from the continuing COVID-19 crisis.

Despite the devastating impact Covid-19 has had on African economies, Moeti said the international partners and countries need to do more to ensure that the resources are there to expand malaria programs making such a difference.

The WHO said that even a mild interruption in access to antimalarial therapy could result in severe loss of life.

Its study indicated that a 10% disruption of Sub-Saharan Africa's access to appropriate healthcare might contribute to an additional 19,000 deaths.

The study said that during the past two decades, 21 countries have prevented malaria.

Outside of Africa, India said it had managed to make remarkable strides over the past two years, with a reduction of 18% in cases and 20% in fatalities.

And, amid the continuing danger of antimalarial drug resistance, Southeast Asia's six Greater Mekong sub-region countries have made substantial progress against their malaria elimination target by 2030, it added.

From 2000 to 2019, the confirmed number of malaria cases in the subregion dropped by 90 percent.