This Leg-Lengthening Surgery Could Permanently Extend Your Legs

Experts say vertically-challenged individuals are investing a lot of money on multiple therapies and even surgery to raise their height.

You'll find a whole plethora of potions and mechanisms to stretch different sections of the body if you check the internet, but men attempting to extend their height is a significant one.

Since the special discreet shoe implants and the growth tablets have been attempted, which are clearly nonsense, one doctor wants more men to go under the knife to lengthen their limbs.

At least 30 people visited Dr. Kevin Debiparshad, an orthopedic surgeon, to have him see beyond their perfectly stable leg bones in 2019.

Debiparshad slices into the femurs or tibias of patients at his LimbplastX Institute in Las Vegas, causes the bones to separate with metal implants and sends them on their path to recovery. When they develop back, their bones may be several centimeters taller.

Leg extension surgery will run customers over $100,000 at the LimbplastX Institute, restricting the clientele Debiparshad sees to the very wealthy and perhaps the very vulnerable.

The leg extension procedure, formally named distraction osteogenesis, includes removing either the femur, tibia or both and using metal braces to expand the bones. Fresh bone cells can expand with time efficiently, making each leg up to three inches wider.

Doctors have used it for over a century to support congenital abnormalities or following serious accidents, but it has become the newest innovation in severe plastic surgery today. 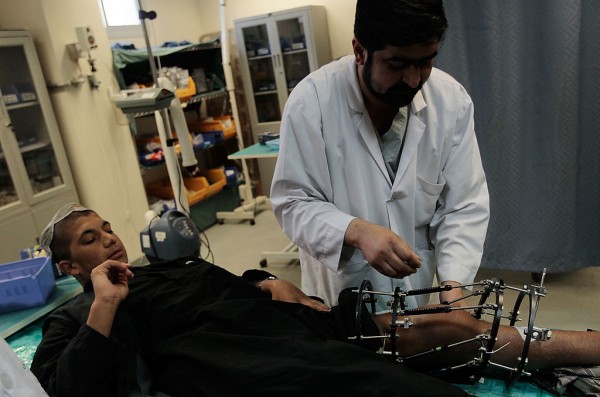 (Photo: Chris Hondros/Getty Images)
KANDAHAR, AFGHANISTAN - MARCH 18: (FRANCE OUT) An Afghan doctor (R) looks over an external leg-lengthening fixator in an Afghan patient (L) having the procedure done to correct a childhood injury March 18, 2010, at Kandahar Regional Military Hospital in Kandahar, Afghanistan. The hospital is one of the premiere Afghan-run medical centers globally and operates in a new building built with American funds on an Afghan Army base near Kandahar Air Field. Under US and British Army medical tutoring, Afghan doctors at the hospital are beginning to conduct advanced procedures never before available at non-NATO hospitals in the impoverished, war-torn country.

Knee-ing up with the trend

Much of his cases were for patients who required leg extension surgery to walk and normally live until Debiparshad began LimbplastX in late 2018.

If the growth plates of an infant, the soft tissue that develops with time and creates new bones, are damaged, one of their legs' growth could end up being stunted.

Adults that have been in a car accident or have part of their bone taken to cure cancer or a severe illness will do the same. In both such situations, a leg extension could be required to balance the lengths of their legs.

Leg extension will be a necessary step in rehabilitation for such patients, the aim being to regain equilibrium and symmetry rather than walking away a couple of inches taller.

For clinical situations, most clinicians who conduct leg extension do so, and Debiparshad tends to handle such patients. Yet leg extension has been another avenue for stable individuals to recruit physicians to fix what they find to be personal shortcomings when clinics like LimbplastX Institute and others arise.

Debiparshad now relates the treatment to butt replacements, nose employment, and even gender reassignment surgery in a controversial manner.

What's the risk of this trend?

The operation is mostly painless, Dr. Debiparshad says. But there are always risks attached to it, even though they are very minimal.

He added that patient complications are greatly reduced by the most innovative and advanced techniques available today."

Chance of infection end-stageusion The bone can heal too soon, not fast enough, or you can feel muscle contracting, equivalent to most other forms of surgical operation and unique to this surgery.

He said patients who underwent leg stretching could lose some athletic ability to get to that end-stage. "You can run and go to the gym, but you might not be able to sprint 100 meters in nine seconds with your newfound stature," he said.

This is potentially the easiest way to get outcomes if you have the cash there and worry about it. If you don't, maybe buy a Dr. Martens pair or something?

That way, you can knock their head in even though anyone calls you a small arse.