The Microscopes and Ion Accelerators for Materials Investigations facility recently helped Dr. Matheus Tunes examine a new alloy that would harden aluminum without the need to increase its weight considerably.

Spacecraft launched from Earth should be light, although it should still have adequate fuel to see them reach orbit.

If it's too heavy, the quantity of fuel would be prohibitive. Once outside the Earth's protective magnetic field, a vehicle then is bared to possibly destructive quantities of solar radiation, which becomes more essential for any long period of a mission like the one in March. 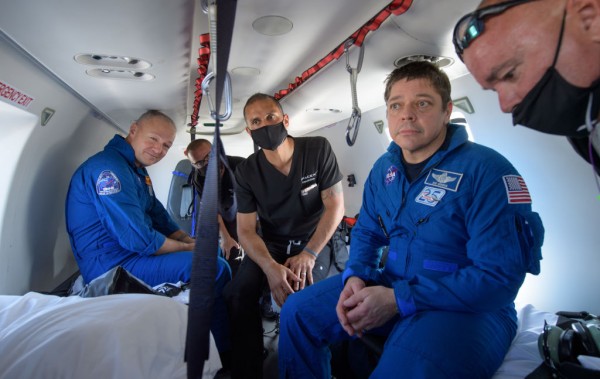 (Photo: Bill Ingalls/NASA via Getty Images)
With manned missions on Mars and the moon presently being planned, spacecraft's advantages, light enough to launch and endure radiation to shield their crews are clear.

Building spacecraft from aluminum is one solution as it is a light material, yet it is a strong one. Alloys help aluminum become harder and stronger through precipitation strengthening, although the radiation experienced ins pace can melt or liquefy precipitates with possibly hazardous and deathly effects for astronauts.

Nonetheless, the study carried out at MIAMI-2, in collaboration with Austria-based Montanuniversitaet Leoben or MUL, has found that a specific "hardening precipitate of a new aluminum alloy" which a team of metallurgists led by MUL's Professor Stefan Pogatscher developed, does not dissolve when blasted with particle radiation when equated with existing data on the conventional aluminum alloys' radiation.

As specified in the study, the result is "an alloy with a radiation-resistant hardening phase," also known as T-phase, which has a multifaceted crystal construction of MG32(Zn, Al)49.

This particular research resulted in a paper which the prestigious Advanced Science journal recently published along with what Phys.org described as an "eye-catching cover."

Tunes also said the paper's notion was testing the said new alloys through the use of MIAMI facilities, as they could subject the alloy to active, energetic particle radiation and simultaneously monitor the impact of this ration on the alloy microstructure using a transmission electron microscope.

The T-phase's crystallographic signal was monitored as the radiation rose. More so, it was also observed that "compared with other conventional aluminum alloys," explained Tunes, the alloys they developed were tolerant to radiation. Meaning, the hardening phase is not dissolving under high doses of radiation.

The nuclear reactor is described in the study as "an extreme environment, just as the sun with solar cycles." However, vibrant variabilities on the sun like solar flares and coronal mass discharges are more dangerous than anything here on Earth.

Furthermore, the sun is a very efficient "nuclear fusion reactor," not to mention a highly dynamic particle accelerator.

According to MIAMI Facility Senior Research Fellow Dr. Graeme Greaves, when Tunes first came to them from Brazil as a postgraduate student, he always searched for new projects and developed several new collaborations.

With manned missions on Mars and the moon presently being planned, spacecraft's advantages, light enough to launch and endure radiation to shield their crews are clear.

Next in line for Tunes and the team is to figure out why such an alloy is behaving the way it does and what other advantages lie ahead.

Tunes said he is particularly proud that he finished his Ph.D. in Huddersfield, "I've now moved to Australia," adding he continue working with Graeme.

To date, they have an active collaboration, and next year would be a busy one for the joint Huddersfield-Leoben "space materials research project," announced Tunes.