Humans have long domesticated animals either for something fluffy to hug or for food. Without domestication, human civilization would be unrecognizable, and there would be no cities or pets around because it is a special relationship between humans and animals. New research reveals that a fish has successfully domesticated shrimps to care for their algae farm.

For the first time, a record of an animal domesticating another animal is discovered by researchers from Australia. Although insects are known to domesticate fungi, it is rare to see domestication happen between other groups of animals.

In an expedition to the coral reefs in Belize, the researchers from Griffith and Deakin Universities discovered that the longfin damselfish seemed to have learned the practice of domestication by employing mysid shrimps to help run their algae farms. 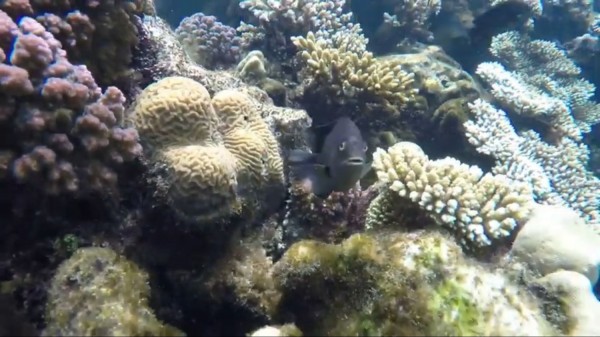 Longfin damselfish are known to be as farming fish as they farm algae for their own food. They use the feces of mysid fish as fertilizer for the algae to grow their crops. In a mutualistic relationship, this also gives the shrimps a haven to live.

According to a New Atlas report, the researchers were able to confirm the domestication of the shrimps by the longfin damselfish inside the laboratory.

Mutualism: When Both species Benefit From Each Other

The researchers tested if the fish protected the shrimps by placing mysid shrimps in a clear bag and then placing them either on the inside or outside the farm. They found that other fish tried eating the shrimp when outside, but inside the algae farm, they are protected by the farmer fish.

Moreover, they tested what benefit fish would get from the shrimps. They discovered that the quality of algae and fish's health improved significantly with the presence of mysid shrimps on their algae farm compared to those farms that do not have mysid shrimps.

The lead author of the study, William Feeney, said that the field studies and experiments they conducted at Carrie Bow Cay Research Station revealed the mutualistic relationship between the longfin damselfish and the mysid shrimps bears all the hallmarks of domestication like how humans keep their farm animals.

He added that, by far, this is the first time that they have recorded a case of non-human vertebrate domestication of another species. It also the first experimental evidence for how domestication in these species evolved.

The researchers published their study in the journal Nature Communications.

READ NEXT: Walking Fish Are More Common Than You Think 11 New Species Found

Check out more news and information on Fish on Science Times.