There's growing evidence that certain bacteria transmitted through scratches from cats and other exposures to animals can, at times, have a shocking effect on the human brain.

In new study findings, investigators detail a group of patients suffering from a psychiatric illness which, at the same time, exhibited signs of infections from bacteria also known as "Bartonella," including tell-tale skin lesions.

Nevertheless, a direct link between the microbes and the brain's worsening condition remains uncertain; neither is it clear how frequently this may occur.

According to Gizmodo Australia, in 2019, North Carolina researchers came out with a case report on a teenage boy who abruptly "developed violent psychosis and delusional episodes in 2015."

Despite repeated confinement at the hospital and various treatments, the young patient showed a little improvement. A year later, doctors noticed the teenage boy had very distinctive lesions similar to stretch marks along with his armpits and thighs. 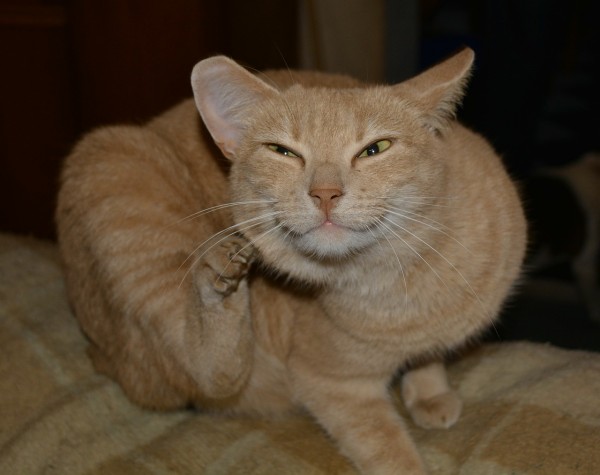 (Photo : sipa on Pixabay)
There’s growing evidence that certain bacteria transmitted through scratches from cats and other animals' exposures can have a shocking effect on the human brain.

Eventually, tests showed the 14-year-old was carrying a lingering bloodstream infection resulting from the bacteria Bartonella, and the boy was given intense antibiotic treatment.

Once his infection got treated, his symptoms similar to schizophrenia disappeared, too, enabling him to continue his normal life and go to college.

Some of these same study authors have now released a follow-up to the said report published earlier this month in the Pathogens journal.

The paper investigated 33 patients who had similar neuropsychiatric symptoms and suspected contacts with Bartonella bacteria. Patients included the boy described in their report last year.

Of these 29 patients, 24 had skin lesions, too, associated with Bartonella infection that appeared simultaneously when their other symptoms started. Such lesions were typically vertical or horizontal reddish scratches looking similar to stretch marks and were detected in the limbs or trunk of people.

Meanwhile, the list of neuropsychiatric symptoms identified in patients comprised of sleep disorders, confusion, anxiety, depression, and migraines, among others.

The Gizmodo article also specified that the rod-shaped Bartonella microbes are rather strange, even among their own.

They can survive and reproduce inside other cells quite akin to viruses, people and typically opt for the cells that live inside or line their blood vessels.

Such a disappearing act enables them to avoid the customary tests for tracing infection and makes it much more difficult for antibiotics to destroy them.

Presently though, it is essential to highlight that this study alone does not prove that Bartonella can result in mental illness, nor how frequently this is taking place if the connection is real.

As the study investigators noted, research on blood donors has presented that many people are carrying signs of infection from Bartonella, although it seems to be just fine.

Also, this research cannot tell too how Bartonella could be leading to brain problems. However, they propose that damage to blood vessels from such bacteria could activate lingering infection that simultaneously affects both the brain and skin.

Aside from the 2019 report, the investigators do not mention any other individual who appears to have recovered from the symptoms once the infection was cleared, which would be solid proof for an instrumental connection.