Scientists Invented a Wearable Device That Can Prevent Alzheimer's Disease

A team of scientists from the University of Otago unveiled a new wearable device strapped across the head and produces electrical pulses to arouse the olfactory nerves. That area is usually known to be dysfunctional during the early stages of Alzheimer's disease.

This Google Glass-like device is fitted with six electrodes placed near the temporal lobe, a part of the brain that controls the organization of sensory input. It is said that this new device will prevent Alzheimer's disease. 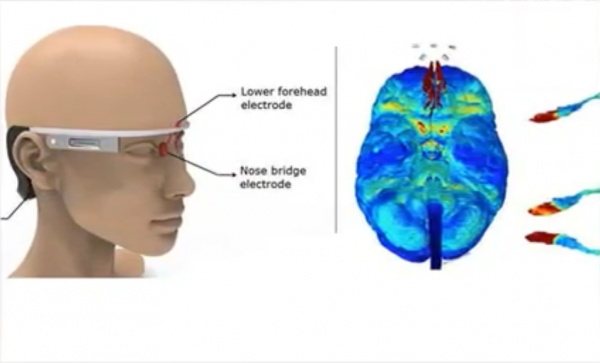 According to statistics, around 13.8 million people above 65 years old in the United States are projected to have Alzheimer's disease by 2050. Unfortunately, this disease does not have any cure. Still, the researchers from the University of Otago are set to combat the numbers of future Alzheimer's patients with their new wearable device.

Yusuf Ozgur Cakmak from Otago's Department of Anatomy and the lead author of the study said that early results of their study pave the way for developing the first non-invasive and wearing brain stimulation system to target the sense of smell to prevent Alzheimer's, reads the study published in the journal Frontiers.

"We're hopeful this method will help stimulate these networks to alleviate symptoms or suppress the progression of Alzheimer's disease to Dementia. It also has the potential to help coma recovery and Parkinson's disease," Cakmak said.

The thin band has electrodes positioned on the nose bridge, upper and lower forehead, and behind the ears that release electric impulses that stimulate the olfactory system and reverse the onset of Alzheimer's disease and Parkinson's disease.

Google Glass was originally built to allow its users to document their life from a first-person perspective by taking and sharing photos and videos in real-time. But other people have also found that it can be useful for those with Alzheimer's disease.

In 2014, Sunrise Senior Living reported that Google Glass could mitigate Alzheimer's patients' wandering to prevent further panic from the family members. It could be programmed to prompt the user of their destination if ever they forgot about it, and it can be used as a map that gives step-by-step directions.

If combined with the GPS, the patient's family can still track them if ever they happen to wander about. Also, Google Glass can be used as a memory tool for seniors who experience dementia by providing them information about people based on facial recognition. Once Google Glass detected a face, it will tell the user any information about that person, like name, relationship, and prior interactions.

Although this is different from the researchers' new wearable device from the University of Otago, both devices have great promise of aiding Alzheimer's patients and preventing people from reaching that stage.