A few days ago, the United Kingdom announced a new variant of COVID-19, called Variant Under Review, year 2020, month 12, variant 01 (VUI 202012/01). Reports said that it is more infectious and easily distributed throughout the country, leading to the immediate enforcement of lockdowns and travel bans from other countries.

Japan has also reported five cases of the variant found in the UK, and just recently, the French health ministries have confirmed one case of the new variant of COVID-19 in France.

New Variant of COVID-19 in France

BBC reported that France confirmed the first case of the new variant of COVID-19 in the country. According to the French Health Ministry, the said person resides in the town of Tours who arrived from London on December 19. The said Frenchman was asymptomatic and is currently under self-isolation. 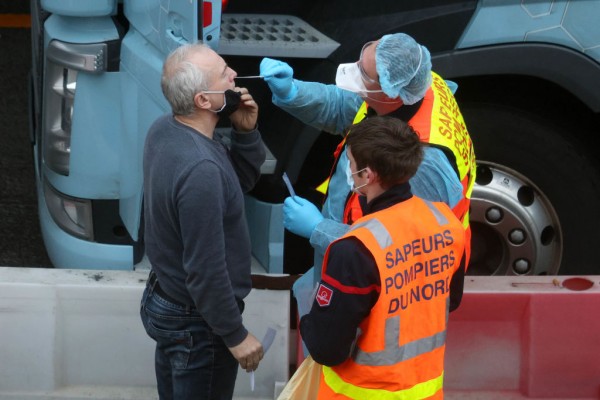 (Photo : Getty Images)
DOVER, ENGLAND - DECEMBER 24: A firefighter from France swabs a lorry driver to test for Covid-19 on December 24, 2020 in Dover, United Kingdom. Travel from the UK to France gradually resumed on Wednesday morning after being suspended for more than two days due to concerns about a new strain of Covid-19. The British government deployed its Track and Trace team to administer Covid-19 tests to lorry drivers waiting to cross at Dover. (Photo by Dan Kitwood/Getty Images)

Travel bans were implemented in the country but it ended on Wednesday, December 23, as long as people coming into France provides a negative test result.

Moreover, the Frenchman tested positive on December 21. The man was living in the UK and reported feeling alright, feeling no symptoms at all. However, authorities did not give any further details.

"The health authorities have carried out contact-tracing for the health professionals taking care of the patient," the health ministry said in a statement.

But aside from France, other countries reported detecting the variant in some countries which all came from the UK recently.

Nextstrain, the one monitoring the new variant of COVID-19, reported that the new variant was also detected in Denmark, the Netherlands, and Australia. Those people all came from the UK before testing positive.

Furthermore, Japan has also first confirmed detecting the new variant from five new cases of COVID-19 in the country. The Guardian reported that five people recorded in Japan were infected with the more highly contagious type of COVID-19. Like the other cases, these five people all came from the UK.

As of now, they are all in quarantine, the Japanese media reported. Japanese health officials are now trying to trace the people these five people had contact with, and the possible routes of this infection.

Japan has already ordered a travel ban and entry to all travelers from the UK, except for returning Japanese nationals and residents. Likewise, the whole world has also imposed tighter travel controls in various countries.

Other nations, such as Saudi Arabia, have temporarily closed their borders entirely, while dozens of other countries like El Salvador and Finland have banned entry to their countries from the UK or British nationals.