Archaeologists discover a thermopolium - the ancient equivalent of a fast-food eatery - in the city of Pompeii, offering insights on dining and tastes of the people at the time.

The discovery marks the first time that an ancient Roman eatery of the sort was unearthed, shedding light on the establishments that were supposedly a hit before the city was buried in volcanic ash in pumice in 79 AD. 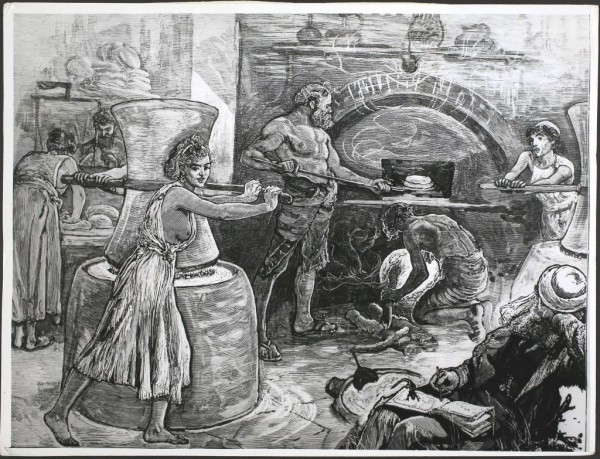 (Photo: Photo by Hulton Archive/Getty Images)
Bakers grinding grain in a bakery in ancient Pompeii, Italy. 'An artist 's dream in Pompeii' from The Graphic Portfolio. This engraving is from a sketch by Mr. Sydney Hall.

In a report from ABC, Pompeii Archaeological Park director Massimo Osanna shared that a segment of the thermopolium was partially unearthed last year as a part of ongoing efforts to shore-up the ancient Roman ruins. Additional excavation revealed parts of the eatery: a multi-sided counter with wide holes on its surface, deep vessels for hot foods (much like soup containers), and more.

"This is an extraordinary find ... it's the first time we are excavating an entire thermopolium," Osanna noted.

Archaeologists also discovered traces of food, close to being 2,000 years old, stored in deep terracotta jars believed to hold hot dishes. They also discovered a decorated bronze drinking bowl - known as a patera - as well as ceramic jars used for cooking soups and stews, wine flasks, and an amphora - o kind of jar with a pointed bottom.

"Our preliminary analyses show that the figures drawn on the front of the counter represent, at least in part, the food and drink that were sold there," explains Valeria Amoretti, one of the anthropologists who worked on the Pompeii dig. She added that there were traces of pork and beef meat and fish and snails in the containers, describing the find as a "testimony to the great variety of animal products" used in the foods of the time.

RELATED ARTICLE: Study says Carbs Were A Brain Food For Our Ancient Ancestors

At this point, about two-thirds of the 66-hectare Roman city has been unearthed.

The ancient city of Pompeii is located in what is now the city of Pompei, near Naples in Italy's Campania region. It was famously buried under lava and ash, together with its neighbor Herculaneum, when Mount Vesuvius erupted. It was reported to be a two-day eruption, beginning with a rain of pumice for about 18 hours, which allowed citizens to escape. Soon after, pyroclastic flows began, destroying everything in its path and changing the landscape surrounding Vesuvius, including nearby coastlines.

A 2010 study revealed that the main cause for victims in Pompeii and Herculaneum is ash suffocation. Simulations and experiments revealed that the pyroclastic flows, reaching temperatures of 480 degrees Fahrenheit, was enough to cause death even at distances of 6 miles from people.

Soon after it was buried, Roman emperor Titus organized a relief effort, although no work was initiated towards the city's recovery. It was largely forgotten across the following centuries and covered with additional ash layers with later eruptions in 471-473 AD and 512 AD.

The next discovery of the ancient city was in 1592 after Italian architect Domenica Fontana discovered parts of the city while excavating an underground aqueduct. His dig led him to ancient walls with paintings, markings, and inscriptions.

It has been designated as a UNESCO World Heritage Site, together with Herculaneum and Torre Annunziata, in 1997.

Check out more news and information on Pompeii on Science Times.