Malaria Now Bites Harder in Africa Due to Drug-Resistant Strain

Researchers claim that new mutations that strengthen tolerance to a medication used to prevent malaria are identified in the current arms race between humans and the parasite that induces malaria.

The research, reported in Nature journal, showed that parasites could avoid treatment with artemisinin, a first-line medication for disease prevention. 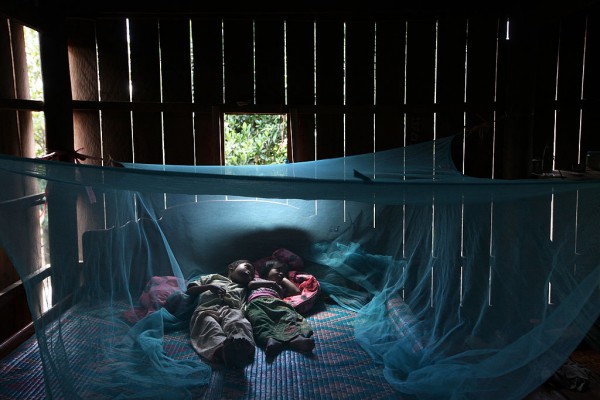 (Photo: Paula Bronstein/Getty Images)
PREY MONG KOL, CAMBODIA - JULY 18: Yonta,6, rests with her sister Montra,3, and brother Leakhena, 4months under a mosquito bed net dry from the monsoon rain July 18, 2010, in Prey Mong kol village in Pailin province. Part of the great success of controlling malaria is due to the distribution by the National Malaria center (CNM) and WHO of the long-lasting mosquito nets that also contain the insecticide embedded into the net, causing the insect to die upon contact.

This is the first instance that scientists in Africa have observed medication resistance to artemisinin. The researchers warn that this will pose a significant danger to public health on the continent.

Malaria causes at least 400,000 deaths per year - mostly among young children in sub-Saharan Africa. Efforts to contain the disease remain hindered by the emergence of drug-resistant strains of the parasite species that cause malaria, amid a long-term global response.

The scientists cautioned in the journal article that malaria parasites built a tolerance to previous medicines.

Also, the experts say these parasites are "suspected of having contributed to millions of additional malaria deaths in young African children in the 1980s."

Once the first medication for malaria, chloroquine, was created, experts believed that the epidemic would be eradicated within years.

Yet, parasites have developed to develop tolerance to successive drugs since the 1950s.

This is a profoundly troubling and incredibly critical time. Today is a failure in the fight against malaria.

Artemisinin resistance is not new since it has been active for more than a decade in South East Asia.

There, 80% of patients are still afflicted with malaria parasites that refuse care in certain regions.

Yet Africa has still been the greatest problem - more than nine out of 10 instances of the disease have arisen there.

Instead of spreading from South East Asia to the continent, tolerance seems to have emerged in Africa's malaria parasites.

However, the effect remains the same - malaria is becoming increasingly complicated to manage.

A mixture of two medications - artemisinin and piperaquine - is now widely used to combat malaria infections.

But then, malaria parasites have begun to build resistance to artemisinin, which was first reported in South East Asia in 2008.

Scientists feared at the time that artemisinin resistance could also arise in Africa and have disastrous repercussions.

The analysis shows that these concerns might have been achieved.

Science-Approved Ways to Fight Back Vs. Malaria

Besides simple strategies such as increasing people's access to mosquito nets equipped with insecticides, here's what will really make a difference:

Improved monitoring to monitor the spread of resistant plasmodia by utilizing molecular and genomic methods is crucial to sustaining development. However, many sub-Saharan African countries do not yet have the tools, workers, funding, or facilities to effectively control malaria sequencing.

Investors and partners have to improve and develop additional resources here, too. The Human Heredity and Well-being in Africa (H3Africa) project has been set up by the National Institutes of Health and the Wellcome Trust to develop capacity on the continent, as has the United States. Funded by the President's Malaria Initiative Antimalarial Resistance Surveillance Network in Africa, which also encourages joint activities throughout the world. Funds have been supported by the Africa CDC and the African Academy of Sciences. Yet, for adequate laboratory capacity, even more, is required.

Create therapies for the next century

A non-profit research and development agency, Medicines for Malaria Venture (MMV), and its research and pharmaceutical collaborators have established the largest antimalarial portfolio in history. The Swiss health care corporation Novartis is designing the most advanced modern antimalarial medication treating parasites exhibiting tolerance to existing medicines. It is now in clinical trials and seeks to handle children as young as six months. More children under five are killed by malaria than every other age category. When it becomes available, national malaria prevention systems must be equipped to integrate this possible new drug into their budgets and care recommendations.

Ensure the medications are used safely by physicians and patients

It leads to the proliferation of drug-resistant malaria parasites as clinicians do not administer medications properly, or their patients do not take the full course as recommended. Efficient, stable prescription and appropriate use need to be improved by policymakers and global health initiatives. For example, Management Sciences for Health facilitates malaria case management in Benin, Madagascar, Malawi, and Nigeria. The industry teaches and reviews healthcare professionals on the use of national standards for malaria treatment.