BGR Media reported yesterday that the B.1.1.7 or the new COVID-19 strain's mutation might not be more fatal but it is "believed to be responsible" for the increasing number of cases "in a country that was already in a soft lockdown one month earlier.

In mid-November, the United Kingdom reached over 33,000 daily cases, and then, it appeared to flatten the curve. The said record was broken after on December 17, 2019, over 35,000 new infections were recorded and reported.

According to the said report, since then, the figures have risen dramatically, just as Boris Johnson, the UK prime minister announced even stricter restrictions for part of the country prior to the celebration of Christmas and New Year. 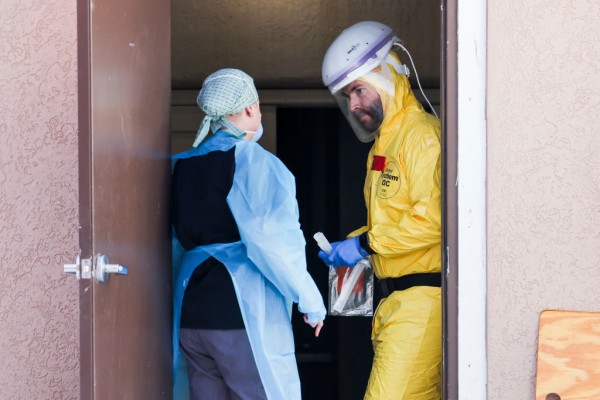 (Photo : Michael Ciaglo/Getty Images)
A Colorado National Guard soldier who was deployed at an ongoing COVID outbreak at the nursing home is the first person in the United States to have tested positive for a more contagious COVID-19 variant

The fact that the country recorded the highest number of coronavirus cases on the last day of December has suggested that even bigger numbers are expected to be reported in the coming days and even weeks ahead.

A spike in deaths is expected to be seen in the next couple of weeks as some of the patients who have just been diagnosed with COVID-19 may unlikely survive the infection.

Despite this, researchers have lots of good news about the B.1.1.7. This mutated strain does not result in severe case, therefore, it is said to be not more fatal.

One of the genetic variations also enables doctors to identify the new variant with a PCR test instead of a more complex genetic sequencing.

Recent research proposed that a new strain of coronavirus possibly cannot infect those who already had COVID-19, and this is good news.

It is also a sign that vaccines will preempt COVID-19 from reaching severity following infection from the said new strain, just like other variants.

Nevertheless, despite the seemingly good news, some scientists are worried that the higher transmission rates of mutation in the UK is likely to still result in more fatalities in the near future.

An article in The Atlantic described the mutated virus as "a ticking time bomb," explaining why mutation in the UK is quite dangerous.

Furthermore, the piece quoted a simple instance that London of School of Hygiene and Tropical Medicine professor Adam Kucharski posted on Twitter.

Based on the remarks of Jonson, B.1.1.7 is approximated to be more than 70-percent contagious compared to other strains. An initial study of the variant specified that the mutation would be more than 50 percent more contagious.

The mutated virus is perceived to be more effective at attaching to cells, which could result in a rise in viral load since the virus would get into more cells and reproduce better compared to other strains.

Kucharski ran numbers with the reproduction rate of the virus at 1.1, a mortality risk of 0.8 percent, 10,000 active contagions, and a "six-day infection generation time."

Given the said figures, the professor said, one could expect around 129 deaths in one month. If the mortality rate increases by 50 percent, the death count rises to 193.

Furthermore, if the transmissibility rate rises by 50 percent, the number of deaths would rise to 978 in just a month's time.

The experiment underscored the fact that a more contagious infection could be more fatal minus inducing the severe disease.

Essentially, this new strain could further cause complications in things in the United States, as well as the other regions minus rapid action.

Fast-tracked vaccination campaigns could contribute to the combatting of increased communicability of the virus. However, until an adequate supply of the vaccine is available, countries might consider further enforcement of safety measures to lessen the danger of B.1.1.7 becoming dominant.