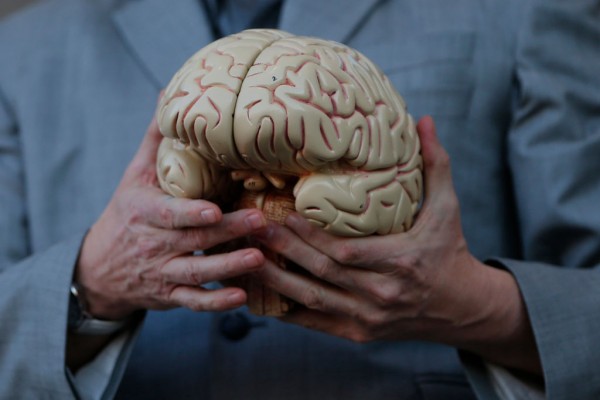 (Photo: Marcelo Hernandez/Getty Images)
SANTIAGO, CHILE - MARCH 16: David Byrne holds a brain during his presentation as part of the first day of Lollapalooza Chile 2018 at Parque O'Higgins on March 16, 2018, in Santiago, Chile.

Researchers from the US National Institutes of Health (NIH) have repeatedly spotted hallmarks of disruption in tissue samples from deceased victims of the disease in a comprehensive analysis of how COVID-19 impacts a recipient's brain. The thinning and leaky brain blood vessels triggered this harm to tissue samples.

Yet, in the tissue samples, the researchers saw no traces of SARS-CoV-2. This means that the harm was not triggered by a direct virus assault on the brain, the NIH said in a research release. The observations were reported in a letter in the New England Journal of Medicine.

Avindra Nath, clinical director at the National Institute of Neurological Disorders and Stroke (NINDS) of the NIH, quoted the senior author of the report as saying that the brains of patients who contract SARS-CoV-2 infection could be vulnerable to harm to the microvascular blood vessels. Our observations indicate that this could be activated by the inflammatory reaction of the body to the virus.

Several tests have demonstrated that inflammation and blood vessel disruption may be induced by the disorder. Researchers find evidence in one of these experiments of tiny concentrations of SARS-CoV-2 in certain patients' brains. Nonetheless, NIH added, experts are also seeking to explain how the disorder influences the brain.

What Are The Factors?

In this report, the researchers performed an in-depth analysis of brain tissue samples from 19 patients who died between March and July 2020 after undergoing Covid-19. Patients died at a wide variety of ages, between the ages of 5 and 73. They died after reporting signs within a few hours to two months. Some patients contribute one or two contributing factors, including asthma, obesity, and cardiovascular disease. Three patients immediately collapsed and died.

The researchers initially used a special, high-powered MRI scanner to analyze measurements of each patient's olfactory bulbs and brainstems. It is assumed that these areas are particularly vulnerable to Covid-19. Olfactory bulbs monitor our sense of scent, while our respiration and heart rate are regulated by the brainstem. The scans showed that the bright spots (called hyperintensities) that sometimes signify inflammation and the dark spots (called hypointensities) that show bleeding were prevalent in both areas.

The researchers then used the scans as a reference to investigate the spots under a microscope more closely. They noticed that the bright spots contained smaller blood vessels than usual, often spilling fibrinogen-like blood proteins into the brain. An immune response seemed to cause this. The places were covered by T cells from the blood and microglia, the brain's own immune cells. In comparison, there were both clotted and leaky blood vessels in the dark spots, but no immune reaction.

Given that it is linked with memory failure and Alzheimer's disease, doctors are worried about the impact of brain inflammation on individuals' long-term wellbeing. Certain patients are now experiencing residual neurological symptoms, such as persistent exhaustion and Guillain-Barré Syndromes.

Experts expect to research in the future how COVID-19 harms the blood vessels of the brain and why this causes any of the short- and long-term effects we see in patients.