[Explainer] Here's Why Earth is Spinning Faster This Year

In modern decades, when the Earth's rotation pace has slowed ever-so-slightly, leap seconds have been introduced intermittently to hold clocks up to date.

But if a current pattern holds, any day soon, time will need to be turned in the other direction. 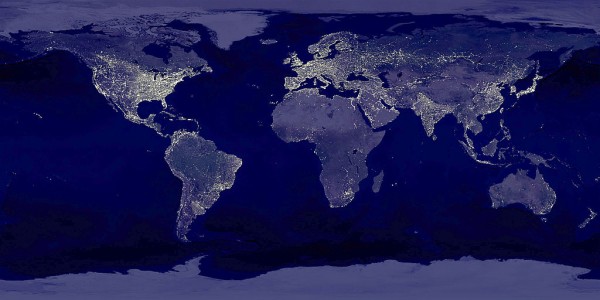 (Photo: NASA/Newsmakers)
385646 01: This image of Earth's city lights was created with data from the Defense Meteorological Satellite Program (DMSP) Operational Linescan System (OLS). Originally designed to view clouds by moonlight, the OLS is also used to map the locations of permanent lights on the Earth's surface.

Science Times reported earlier this month that the Planet had achieved the highest spin rates in the past half-century.

Peter Wibberley, a senior research scientist with the British National Physical Laboratory, told The Daily Telegraph that if the Earth's rotation rate rises more, a negative leap second could be conceivable.

According to the British media, the Earth's rotation's pace fluctuates continuously due to various causes, including shifting the center of the globe and seas.

Scientists found the last leap second in 2016. According to the International Earth Rotation and Reference Systems Service, the next leap second remains unplanned.

Why does it matter how fast the world spins?

This does not sound like much, but it has major effects over time because atomic clocks used in GPS satellites do not consider the Planet's evolving motion.

It gets to the same location a little quicker if the World revolves faster. At the equator, a half-a-millisecond equals 10-inches or 26 centimeters. In brief, GPS satellites, which still have to be adjusted for the consequence of Einstein's general relativity theory (space and time curve), would soon become useless.

There are potentially confusing implications for smartphones, computers, and communications systems that synchronize with Network Time Protocol (NTP) servers. Described as the number of seconds after 00:00:00 UTC on January 1, 1970, regular Unix time is not intended to accommodate leap seconds, while it may be less troublesome to provide a "fall second."

Why does the planet spin more quickly?

The movement of the planet has actually decreased over the years and is an anomaly right now.

Due to several variables, the Earth's rotation will shift slightly. The strain, seismic activity, and total rotation of our planet's inner molten center is a significant influence, which can also spin only a little faster than the world as a whole.

Like the environment, the wind, the seas, and the Moon, some geological activities such as earthquakes also have a minor impact. The above speeds down the Planet's motion steadily. Its magnetic force induces waves that allow Earth's orbital direction to slightly elliptical around the Sun.

One hypothesis, though, implies that the slowing movement of the Planet could be our own. Some evidence indicates that in the 20th century, glaciers' melting put less weight on the rock at the poles, thereby rebounding upward and turning the world rounder. The consequence of that might make it spin quicker and could even shift its tilt slightly.

So, 2020 was an anomaly, and the normal day lasts just longer than 24 hours in other years. The International Earth Rotation and Reference Systems Service (IERS) adds more leap seconds into atomic clocks per two to three years since getting used to the Earth's incremental slowing since 1973. The latter of these was on 31 December 2016, 30 June 2015, and 30 June 2012.

Therefore, with the last addition of a second, any waste has been built-up, but in 2020, the World ceased. Its average duration of the day was almost exactly 24 hours. It orbited the Sun a mere 1.28 milliseconds quicker than normal over the year.

But the IERS have decided that this coming June, they're not going to introduce a leap second. It would probably suggest subtracting a second, which for IERS will be a first in the future.

Why would the planet move faster in 2021?

That's because it's expected the World will begin to accelerate in 2021 and be in deficit by 35.40 milliseconds at the end of the year.

Right now, the average duration of Earth's rotation (known as UT1) is marginally behind Synchronized Universal Time (UTC), the norm used in the world to preserve time (which meets International Atomic Time) (TAI).

2021 would see us accumulate a lag of 19 milliseconds of atomic time. If the latest acceleration in the planet rotation persists, we would require something different, a negative leap second, to time-keep on Earth. A day lasting 86,399 seconds would mean that.

Do we still need to apply a second to certain years of atomic clocks and deduct the next one to hold UTC near the mean solar time?

A faster-spinning Earth has ramifications. One of them might be that the whole principle of atomic clock modification is a total waste of time in our age.

Check out more news and information on Physics & Math and Time on Science Times.