Astronomy 2021: Your Guide to The Full Moons, Eclipses And Meteor Showers This Year!

Do you realize that when you stargaze, you look back in time?

This is because it takes time for the light from the stars to travel some measurable distance, making it the nearest thing we're going to get anytime soon to time travel or any flight.

This year, from full moons and meteor showers to eclipses, stargazers, moon hunters, and astronomy enthusiasts should look forward to many natural events that are noticeable in the sky. We've put together this astronomical schedule of the celestial highlights of 2021 worldwide to help you keep track of them all! 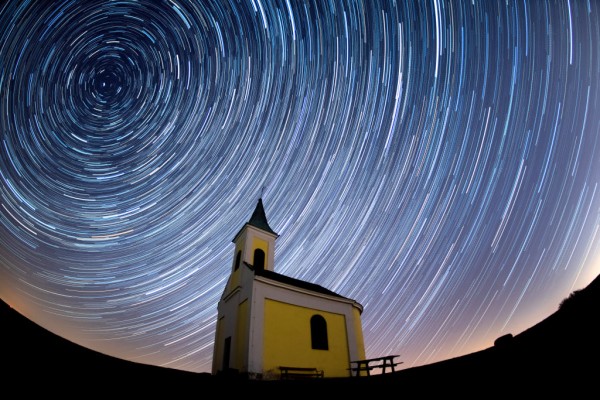 (Photo : Thomas Kronsteiner/Getty Images)
NIEDERHOLLABRUNN, AUSTRIA - APRIL 21: (EDITORS NOTE: Multiple exposures were combined to produce this image.) Startrails are seen during the Lyrids meteor shower over Michaelskapelle on April 21, 2020 in Niederhollabrunn, Austria. The clear skies created by the New Moon coincide with the Lyrid meteor shower, an annual display caused by the Earth passing through a cloud of debris from a comet called C/186 Thatcher.

Disclaimer: These heavenly occurrences are all-natural phenomena, many of which are not readily apparent to the human eye. Investing in a decent telescope or binoculars and visiting a spot where you can see the stars more plainly is suggested. For more details, please check out this page.

Mercury Visible in the Night Sky

The planet Mercury is noted for its odd non-circular orbit, which is observable only for a few weeks at a time when the light of the sun normally drowns out.

And it will achieve the highest divergence from the sun in January and February - regarded as Mercury at the Greatest Eastern Elongation - indicating that it will glow visibly across the UK in the twilight atmosphere.

On January 24, it will hit its optimum point and should be apparent only after the sunsets. Spotting may be difficult, but there are online resources to help you decide where to look.

However, in both situations, before the sun has fully vanished from the sky due to the possibility of irreversible sight injury, do not search for Mercury using binoculars.

A few times a year, full moons, known as supermoons, arise. They get that nickname because they tend to be around 14% bigger and 30% lighter than a normal full moon. The greatest vision comes as the moon peeks over the horizon in the early evening.

The moon is one of his favorite things to watch, said Kevin Schindler, a curator at the Lowell Observatory in Flagstaff, since observation needs little equipment: only your eyes. If you want to see more information, such as craters, use binoculars or a telescope.

Many that skipped the Quadrantids' meteor shower in early January will have another opportunity to see some stars shooting in the night sky.

April can see the annual rainfall of Lyrids meteors across the UK, which generates at its height about 20 shooting stars an hour.

C/1861 G1 Thatcher leaves behind bright particles as they pass by the Earth's upper atmosphere at 110,000 mph and create visible meteors.

This year, though, the Lyrids align with a nearly complete waxing gibbous moon, ensuring that the glare could obscure vision. However, if watching from a dark spot free of light interference after midnight, it would still be possible to get a good shot of the brightest meteors in the shower.

This meteor shower seems more impressive in the southern hemisphere, but it can also be observed in the north.

It happens as Halley's Comet travels through the rubble left behind by the Planet, with the ions burning when they travel through the upper atmosphere.

Stargazers may prepare to see around 30 meteors every hour in the northern hemisphere, peaking at night between May 5 and 6. With up to 50 meteors observable every hour, it is predicted to be at its most intense at about 3 am if environmental conditions permit.

The month of May would herald a phenomenon known as the Micromoon, coinciding with the apogee, the point farthest from Earth in the Moon's orbit.

It is basically the inverse of a Supermoon, and this month's Micromoon is a Mini New Moon, taking the optimal conditions for stargazing with it.

It may seem even lighter in the atmosphere when it is farther down - and because it looks smaller, it can often be less light than normal.

The Perseids, probably the brightest meteor shower of the year, will dazzle stargazers worldwide with as many as 100 shooting stars an hour at the max.

When the earth crosses paths with a debris cloud in the solar system left by the massive Swift-Tuttle comet, this astronomical event, known as the fireworks of existence, is ignited.

They flare up when pieces of rock and dust enter our atmosphere at an astronomical speed, allowing fireballs to fly through the sky in certain situations.

It is noticeable between July 17 and August 24, and it peaks overnight between August 12 and 13 every year. You don't require any special equipment to detect these meteors since all are noticeable to the human eye, but for a better view, watching from a dark position away from light interference is often advised.

Jupiter and the Resistance of Saturn

Saturn, which will pass straight from the Sun in August to the opposite side of the Planet, rendering it the nearest it will come to Earth on August 2.

It would be brilliantly lit by the sun because of its near proximity and will be noticeable in the sky all night, making it the ideal chance to take a better peek at this celestial giant - and the Seeliger impact would render the rings seem sharper than usual.

And just a few weeks away, on the 19th of August, Jupiter is going to be in opposition, and it's going to be bigger and lighter than at any time in the majority of the year. Through a decent set of binoculars, you should be able to see the four main satellites (it has 79 in total) showing as light dots on either side of the globe.

There's almost no way to see Neptune in the night sky without any form of special equipment under regular conditions.

But in fall, anyone equipped with plain binoculars or a basic small telescope will be able to view this faraway planet as it travels in opposition to Earth. On 14 September, it will hit the opposition and will be clear all night long.

When the Planet moves around debris left by Halley's Comet, this yearly meteor shower is activated. Since the meteors appear to arise or radiate from the same region as the star, the Orionids are called after Orion.

It's not as powerful as some of the other meteor showers seen during the year, but you could see 10 to 20 meteors every hour at its height from a dark spot, with the moon out of the way.

The meteors themselves are not the brightest and are very quick, so you'll need to be focused, but once it's gone, they compensate for it with some of the longest-lasting light streaks, known as trains.

Usually, this meteor shower is a mild one, but there were impressive variations in the past - including a stormy showing in 2018.

It is produced by the dust debris left in the northern sky by Comet Giacobini-Zinner and corresponds with the head of the constellation known as Draco the Dragon.

The shower occurs this year on the night between October 8 and 9. It is better seen at nightfall in the evening, unlike most other meteor showers where after midnight activity is usually maximum.

Uranus is typically covered and out of view to onlookers, and even in the most optimum circumstances and with the exact coordinates of where to find it, you'd fail to see it with the naked eye.

But its November location ensures that anyone with binoculars or a tiny telescope will have a rare chance to have a perfect look at the enigmatic giant, which will not only be tall, bright and simple to see, but will also travel steadily in the sky on either side of November 5 over the period of a month.

Comet Tempel-Tuttle is affiliated with the quick, bright Leonids and is named after the Leo constellation.

This year's shower peaks between midnight and dawn on 16 and 17 November.

Every 33 years or so, as hundreds and even thousands of shooting stars can be observed. The Leonids are often remembered for their impressive meteor storms - although there is a bit of a wait for the next one, which is not anticipated until 2034.

Typically at its height, a normal shower generates around 10 to 20 meteors every hour.

In a very extreme partial eclipse, lasting 3 hours and 28 minutes and observable in eastern Asia, Australia, the Pacific, and the Americas, the Moon would be nearly obscured by the Earth's shadow.

The Geminids are especially spectacular for their multi-colored firework-like meteors, one of the last great showers of the year.

Although most are white, others are yellow. Due to traces of metals such as sodium and calcium in the debris that produces them, a few are green, red, and blue - left behind by the asteroid 3200 Phaethon and providing unexpectedly vivid bursts of illumination.

More than 100 meteors per hour are known to create this shower at its height - and the Geminids are expected to have the maximum average intensity of the year in 2021, making it one to look out for.

Between December 13 and 14, they will peak at night and are better viewed from a dark spot.