Skin Cancer Myths and Facts: How to Spot Signs and Symptoms of Melanoma

One of the most common types of cancer in the US is skin cancer. Over the lifespan, approximately one in five persons in the nation contract melanoma.

A variety of misconceptions also surround it, considering the increasing prevalence of the illness, hindering citizens' willingness to defend themselves from the disorder. 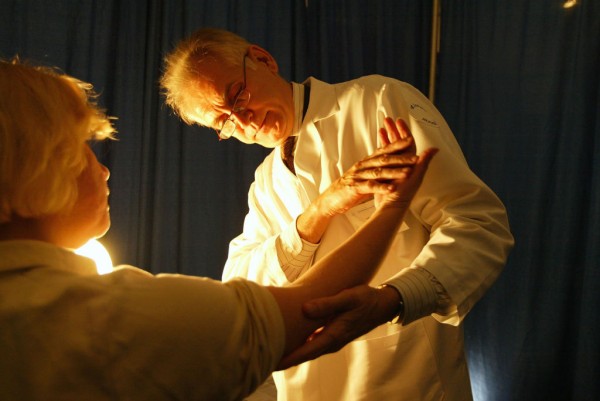 (Photo : Spencer Platt/Getty Images)
NEW YORK - MAY 3: A doctor from the American Academy of Dermatology checks Christine Trerotoli for signs of skin cancer May 3, 2004 at Bryant Park in New York City. The American Academy of Dermatology offered free skin cancer screenings at the day long clinic and gave advice on how to protect your skin from the sun. More than one million cases of skin cancer will be diagnosed in the United States this year which will kill an estimated 10,250 people.

For anything as life-and-death situation as skin cancer, to keep people healthy in the heat, common myths and information disparities must be dismissed.

Relative defense from ultraviolet (UV) B radiation, the primary source of reddening and sunburn, relates to SPF, or sun protection factor.

The British Association of Dermatologists (BAD) Professor Brian Diffey told Raconteur that people generally understand as how much longer it takes for sunscreen-covered skin to burn relative to exposed skin.

People mistakenly believe that using a higher SPF implies they will remain longer in the sun without hurting if they adopt the same theory.

In fact, irrespective of the ranking, any SPF product's blocking impact only lasts for approximately two hours until it needs to be reapplied.

However, experts warn that the prescribed levels of sunscreen are rarely used by individuals, limiting their safety to half or even a third of the labeled SPF.

Importantly, no protection against UVA rays penetrating deep into the skin is offered by the SPF rating. They may even induce skin cancer, but they don't lead as much to sunburn. The UVA star ranking should also be tested by customers, from one (minimum) to five (maximum), representing the absorbed UVA radiation percentage.

ALSO READ: Your Cup of Joe Could Prevent Skin Cancer

'I still stay in the shade on holidays, so don't think about sunburn and skin cancer.'

It is a great necessary precaution against skin cancer to seek out shade, specifically when the sun is highest around 11am and 3pm.

But Cheryl Lythgoe, Benenden Health's head matron, also advised Raconteur that resting alone in the shade does not provide extra security as ultraviolet rays spread more quickly in the environment than visible light. The UV light will then bounce and refract on to the skin and still cause harm.

Reflective surfaces such as water or light-colored sand heighten this influence, while the sun may also filter through both the dappled shadow of trees.

Dress at least 30 SPF sunscreen, a wide-brimmed hat and clear eyewear, also in the shade.

The primary culprit of skin cancer is sensitivity to the sun, although other factors exist:

A greater chance of skin cancer is often experienced by people with freckles, and numerous or rare moles.

Dark-skinned individuals had no skin cancer

No one is free from cancer of the skin. Skin cancer may occur in people of all skin colors, including African-Americans, Asians, and Hispanics.

Saira George, M.D., a dermatologist for MD Anderson, said skin cancer is also detected later at a more advanced level. That's because the risk of skin cancer growing on darker skin may not yet be noticed by both physicians and patients before it is too late.

According to Stuff.nz, Melanoma New Zealand uses is an ABCDEFG method to check on moles and freckles.

Asymmetry. One part of a mole or freckle varies from the other.

Different. An "ugly duckling" looks distinct from other areas, freckles or moles.

Firm. Feels steady to the touch.

Growing. The moles that are bigger than 6mm and begin to expand.

Prevention is still going to be the answer, however accidents do happen and what exposure you have received in the past can't be reversed. This doesn't mean that potential security won't benefit either. It takes a lot of time to invest in yourself, get screened and keep an eye on your face.

ALSO READ: Spotting Skin Cancer Before It Gets Too Serious