A team of international scientists has found a minuscule chameleon in Northen Madagascar that is believed to be the smallest reptile in the world.

The newest discovered chameleon is called the Brookesia nana (B.nana) that is extremely tiny that the adult male measures less than an inch including its tail and is considered to be the smallest reptile among the 11,500 known reptile species. The females are a bit larger than the males, at about three-quarters of an inch from vent to snout.

The team published their study on January 29 this year in the journal Scientific Reports. 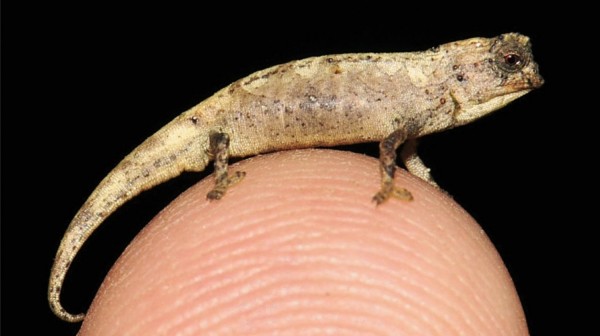 (Photo : Scientific Reports)
Adult male Brookesia nana that only measures less than an inch including its tail. Screenshot from Scientific Reports/ Extreme miniaturization of a new amniote vertebrate and insights into the evolution of genital size in chameleons by F. Glaw et al.

Foreigner.fi reported that the team of international scientists has uncovered a new tiny but well-endowed chameleon which could be the smallest reptile in the world. It was discovered during a German-Madagascar expedition in the northern part of the country.

According to the report of the Bavarian State Collection of Zoology in Munich, the Brookesia nana only measures 13.5 millimeters. This makes the chameleon the smallest male reptile among 11.500 known reptiles, said Frank Glaw who co-authored the study.

"The extremely miniaturized males of the small species need relatively larger genitals," said Miguel Vences of the Technical University of Braunschweig and study co-author, in a Bavarian Natural History Collections press release, "in order to successfully mate with the larger females."

Why Are The B. nana So Tiny?

According to Gizmodo's report, the genus Brookesia is similarly small and lives in the northern forests of Madagascar. Co-author Mark Scherz noted that these species do not have much capacity for color-changing unlike the bigger lizards in the family.

As for why they are so tiny, the island rule could help explain it.

The rule says that animals in isolation or on an island sometimes grow much larger or smaller than their non-isolated relatives if it helps in their survival.

The researchers said that the island rule does not apply to many lizards, and the B. nana's habitat may not have affected its size. Other factors could be at play why they are so tiny.

For example, if a smaller body size could help them with having food resource, it can be worth getting smaller. Also, if it helps the species to evade its predators to be smaller, then the species might adapt to that size, although researchers noted that it is harder to imagine.

Moreover, they noted that the habitat of B. nana may be threatened as deforestation is growing rampant n Madagascar. Like many places, economic development could significantly reduce the habitat of many species in the country.

Fortunately, it has been declared a protected area that will hopefully stall, if not completely, stop the threats to the worlds' smallest reptile.

Check out more news and information on Reptiles on Science Times.