Coronavirus Makes Autoantibodies That Attack The Body's Own Tissues

The latest report published this week suggests that the novel coronavirus can trigger the production of autoantibodies that attack the patient's own tissues instead of the virus. These so-called antibodies can last for months even after the infection has been resolved, causing irreparable harm.

The New York Times reported that this might help explain the lingering symptoms in people who have recovered from COVID-19. It is sometimes referred to as long COVID with symptoms including dementia, brain fog, and joint pain. 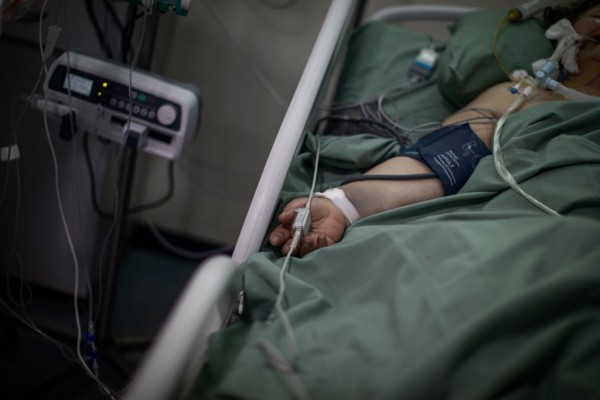 (Photo : Getty Images)
BEIRUT, LEBANON - JANUARY 15: (EDITORIAL USE ONLY) A patient lies in a bed inside the Intensive Care Unit of Rafik Hariri University Hospital on January 15, 2021, in southern Beirut, Lebanon. The number of infections have been increased after social interactions during New Year celebrations and the country has declared a state of emergency. (Photo by Diego Ibarra Sanchez/Getty Images)

Autoantibodies are those antibodies that mistakenly target or react with the own tissues of the body. The immune system may create autoantibodies when it fails to distinguish between the "self" and "non-self".

They are the hallmark of autoimmune diseases or a condition wherein the immune system attacks the body, like lupus and rheumatoid arthritis, according to Science Direct.

The most recent study about COVID-19 producing autoantibodies is just small with only nine patients as their participants. They found that five of these patients have autoantibodies for at least seven months after recovering from the infection. But this study is not yet peer-reviewed for publication and the authors cautioned readers for misinterpretation of results.

The medical director of the special pathogens unit at Boston Medical Center and co-author of the study Dr. Nahid Bhadelia said that the

"It's a signal; it is not definitive," said Dr. Nahid Bhadelia, medical director of the special pathogens unit at Boston Medical Center, who led the study. "We don't know how prevalent it is, and whether or not it can be linked to long COVID."

Dr. Bhadelia said that the issue f autoimmunity after recovering COVID-19 is an urgent and important matter. About one in every three survivors of the infection is found to still experience symptoms.

She said that this is a real phenomenon and that a second pandemic is possible, wherein it is filled with people that have an ongoing potential disability that may not make them able to return to work that will cause a huge impact on the health systems.

There is growing evidence that says autoimmunity could significantly contribute to the severity of COVID-19 in some patients, the Deccan Herald reported. For example, a study published in October found that more than 70% of the 52 patients with severe COVID-19 case carried autoantibodies that attacks their own DNA and proteins that help with blood clotting.

Moreover, another study also published last October revealed that autoantibodies to carbohydrates made by the body of some patients could help explain neurological symptoms.

While a study published in Science Translational Medicine in November discovered that 50% of hospitalized COVID-19 patients had at least transient autoantibodies that clots and blocks the blood vessels.

That being said, experts are concerned that there is a possibility that lingering autoantibodies could lead to autoimmune disease in some people that are tested positive for COVID-19.

Autoantibodies Alter the Course of Disease

Akiko Iwasaki, an immunologist at Yale University said that once the autoantibodies are induced, it will be a permanent part of the person's immune system. Her team showed that severely ill patients have a significantly increased amount of autoantibodies in their system that attack their brain cells, tissues, and clotting factors.

According to their findings, patients with severe cases of COVID-19 had many autoantibodies that affect the immune response and exacerbated the illness.

Immunologist Marion Pepper of the University of Washington said that the study convincingly shows that autoantibodies can alter the course of the disease.

Autoimmunity after an illness is not unique to coronavirus patients but can also happen to other diseases, such as malaria, leprosy, and respiratory viruses.

RELATED TOPIC: For Some People, COVID-19 Might Spread Through Eating