NASA's robotic space rover is now launching its eighth of the 24 expected orbits around our star. The Parker Solar Probe from NASA is the nearest man-made kit to the Earth, passing within 8.4 million miles (13.5 million km) from the infernal surface of the Sun.

This week, the scientific observatory was reported as hurtling at 289,932 mph (466,600 kmh) across this hellishly-hot climate, equaling its proximity and speed records. 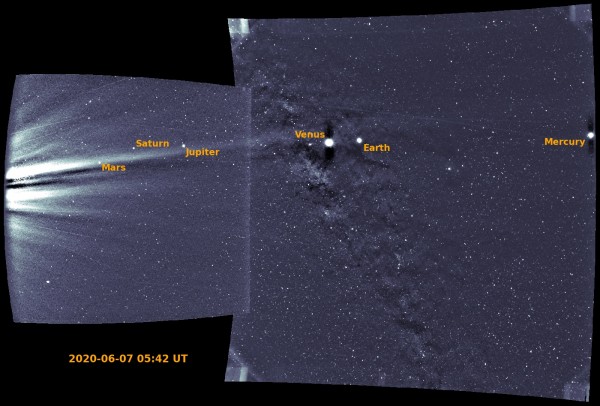 (Photo : NASA/Johns Hopkins APL/Naval Research Laboratory/Guillermo Stenborg and Brendan Gallagher)
Parker Solar Probe was making its closest approach to the Sun on June 7, 2020, when its Wide-field Imager for Solar PRobe (WISPR) captured the planets Mercury, Venus, Earth, Mars, Jupiter and Saturn in its field of view.

The Parker beams-back stream of rich data to our world some 147 million miles away confirms knowledge collected by other spacecraft and hundreds of earthbound telescopes.

And these contributive findings, when integrated, give a detailed and organized summary of solar development.

NASA's cutting-edge spacecraft observed the transmission of a 'sound one' on January 27.

This suggests that considering the probe's unenviably near proximity to the star while performing its final stretch of the solar encounter, Parker's systems all remain entirely operational.

The course of this seventh solar orbit culminated in the perihelion of the NASA spacecraft, its nearest to the Sun, being in Earth's direct vision.

As a consequence, during the days following perihelion, some 40 Earth-based observatories across the globe focused their telescopic sights on the Sun.

Simultaneous observations of this passage were made by satellites, including NASA's Solar Dynamics Observatory (STEREO), TIMED, and Multiscale Magnetospheric Flights, the European Space Agency (ESA) and NASA's Solar Orbiter, and ESA's BepiColombo.

"Parker Solar Probe has shown us that there is a lot more interconnected activity near the Sun than we once thought," he said in a statement.

Raouafi said that with this nearest approach apparent from Earth, astronomers have a great chance to place as many eyes on the Sun as they can to help them produce a large image.

He really thanked too many observatory and project teams' enthusiastic collaboration to make it possible.

Parker is now approaching its mission's most fascinating and perilous time.

Launched in August 2018, NASA's Parker Solar Probe is utilizing the gravity well of Venus to sweep even closer to the Sun over the next two years; one of its solar flybys would come as near as 3.83 million miles. It would be the first spacecraft to travel into the Sun's outer atmosphere, a poorly recognized and scorching-hot substance known as the corona, in addition to having an unprecedentedly accurate view of the stellar furnace at the center of our solar system.

ALSO READ: NASA Will Send the Parker Probe Into the Sun's Corona

As serendipity would have it, the Wide-field Imager for Solar Probe or WISPR instrument was in view of most of the planets of the solar system on June 7 of last year. Stitched together, these two picture frames above show the Sun to the west, with dusty planets and gas giants reaching out beautifully to the right.

With such entertaining photographic prowess, it isn't the only spacecraft.

As a blog post on NASA's Earth Observatory blog reported, the Solar and Terrestrial Affairs Observatory or STEREO of the Space Agency even saw the same six worlds in the inner solar system from its own home elsewhere. With his heliospheric imagers, cameras specifically equipped to monitor the expulsion of matter from the Sun into space, it snapped its own sextuplet picture.