A backpack is a useful tool to carry loads that are used in everyday life. It is commonly utilized by students, hikers, explorers, and many more. However, carrying heavy loads in the backpack could be tiresome and cause back and neck pain.

But worry no more as a new backpack was developed to help hikers, soldiers, and even students ease their burden of carrying heavy loads. The scientists created a load-reducing backpack prototype that makes the load 20% lighter by harvesting mechanical energy from walking to power smaller devices.

Published in ACS Nano, the research has shown that the device could also be used by athletes, explorers, and disaster rescuers that work in remote areas that do not have electricity. 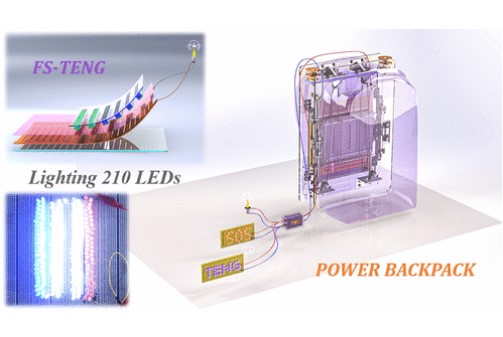 Harnessing Mechanical Energy From Walking and Converting it to Electricity

Long-distance walking or hiking could be even more daunting than it should be if a heavy backpack is added to that mix. But since all the things inside the backpack are necessary, people are forced to bring them along.  That even makes them wish to carry these loads with little to no effort.

It seems that the developers of this new backpack were on point when they made the load-reducing backpack. It is a biomechanical energy harvesting device that deals with this kind of problem that harvests mechanical energy from walking and converts it to electricity to power the device.

Interesting Engineering reported that while triboelectric nanogenerators (TENG) were used to make the backpacks, the researchers find them problematic because of low power outputs. Since they do not have a load-lightening or shock absorption features, the researchers were inspired to design a better prototype with these qualities.

The news outlet reported that the movement between the frame of the backpack and its load achieved a 14% efficiency of converting electricity. The researchers powered an electric watch, fluorescent tubes, and LEDs using this process.

The main goal of this new backpack is to reduce the labor from carrying heavy backpacks. According to TechXplore, the researchers incorporated two elastomers in the backpack that could stretch and shrink while also keeping it steady. The person walks to save labor and absorb shock.

As a result, about 20% is reduced in the force exerted by the wearer. The researchers also said that it allowed the load-reducing backpack to reduce about 29% in the vertical swaying of the load.

The load-reducing backpack has great potential as a power source for small-scale wearable and portable electronics, provided that the researchers successfully overcome some of its challenges, like improving its electricity conversion efficiency.

Additionally, the scientists said the device could be used as a power source for GPS devices and health care sensors.

Check out more news and information on Energy and Tech & Innovation on Science Times.