Optical coatings have been used to modify lenses to reflect or transmit certain wavelengths of light through them. However, no optical coating has been recorded to be capable of both reflecting and transmitting the same wavelengths - until now.

Researchers from the University of Rochester in New York and Case Western Reserve University in Ohio report in Nature Nanotechnology, February 4, about a new class of optical coatings called Fano Resonance Optical Coatings (FROCs) that can be applied to optical filters to both reflect and transmit colors of impressive purity. Furthermore, this new class of optical coatings could be adjusted to reflect a very narrow range of wavelengths of light. 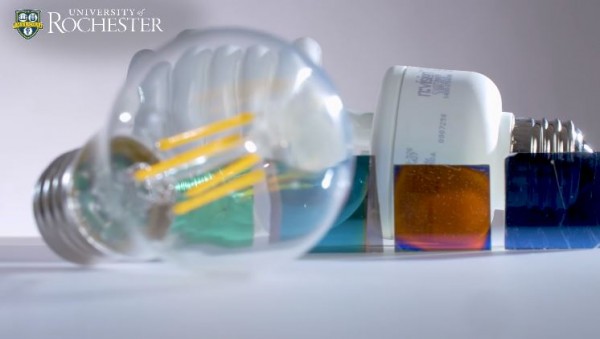 (Photo: University of Rochester YouTube Channel)
Through design, the coating can both reflect and transmit the same color, a unique property that is not obtainable with existing coatings.

Controlling All Parts of the Solar Spectrum

"The narrowness of the reflected light is important because we want to have a very precise control of the wavelength," says Chunlei Guo, a corresponding author of the study and a professor at the Institute of Optics at the University of Rochester, in a university news release. He adds that before they fabricated FROCs, the only coating capable of such precise reflection was a multilayered dielectric mirror. However, this existing tech is a lot thicker and suffers from strong angular dependence - meaning the light it reflects depends on the incident angle of light with the lens - not to mention the costs involved in fabricating them. All things considered, the new class of optical coatings offers a low-cost, high-performance alternative to those multilayered dielectric mirrors.

Researchers are looking into a few applications that could start using FROCs. One of them is demonstrating how these optical coatings could help separate the thermal and photovoltaic bands of the solar spectrum of light from the sun. Should it work as intended, FROCs could improve devices that use hybrid thermo-electric power generation, such as solar cells.

"Directing only the useful band of the solar spectrum to a photovoltaic cell prevents its overheating," Guo added. Removal of the overheating factor could lead to an increase by as much as six times for the life span of a photovoltaic cell. The filtered part of the solar spectrum could then be absorbed elsewhere as thermal energy, which could also be harvested and stored in other ways - usable for power generation, solar-powered water sanitation, or heating.

However, as with most new technologies, Guo clarifies that "it will take a little bit of time for us or other labs to study this further and come up with more applications."

Their new optical coatings are built on the idea of Fano resonances. Named after the Italian-American theoretical physicist Ugo Fano, the phenomenon describes widespread wave scattering usually created by background interference on a resonant scattering process. While researchers detected Fano resonance in optical systems, Guo says it involved "very complex designs." Instead, they found a simpler method of utilizing this phenomenon for their optical coatings.

To achieve their FROCs, researchers applied a germanium film 15 nanometers thick on a metallic surface, creating a surface that absorbs a wide range of wavelengths.

Check out more news and information on Photovoltaic Cells in Science Times.