Researchers Created a Magic Carpet Through Light; Will This Hoverboard Make It To NASA?

Researchers at the University of Pennsylvania were able to hover two tiny plastic plates with light. 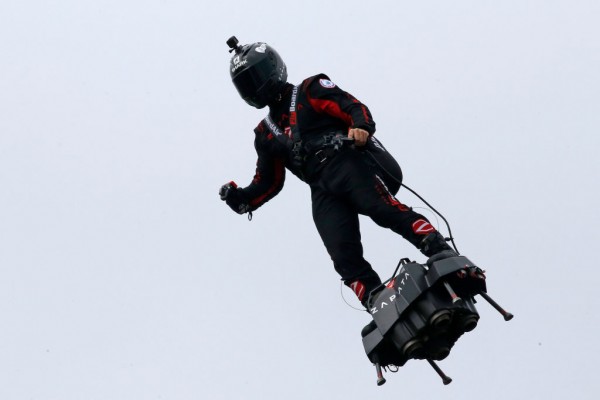 (Photo: Thierry Chesnot/Getty Images)
PARIS, FRANCE - JULY 14: Zapata CEO Franky Zapata flies a jet-powered hoverboard or "Flyboard" during the traditional Bastille Day military parade on the Champs-Elysees avenue Avenue on July 14, 2019, in Paris, France. At the invitation of French President Emmanuel Macron, a dozen European leaders, including German Chancellor Angela Merkel and President of the European Commission Jean-Claude Juncker, participate in the traditional parade of July 14, which is placed this year under the sign of European military cooperation.

The team coaxed two small Mylar plates to lift with the energy from a series of bright LEDs in a vacuum chamber, a bona fide achievement, Wired reported. Scientists had never been able to allow an entity so big to float using light alone before.

"There was a gasp between the four of us when the two samples were lifted," UPenn engineering doctoral candidate Mohsen Azadi said.

Researchers at the University of Pennsylvania have managed to cause tiny plastic trays to hover using only light. Next up: Back To The Future-style hoverboards 💡 pic.twitter.com/tPGdVLwA88

For plants, people, the Earth, and solar paneling technologies, the Sun is a vital energy source that utilizes sunlight to deliver electricity.

For researchers from the University of Pennsylvania who used light energy and converted it into force that can propel objects, this is exactly the same scenario.

It was only introduced to two tiny objects by the researchers, so it may be a future breakthrough that would fast track human technology for years.

But you may have to keep waiting if you're hoping to pick up a light-powered magic carpet from Amazon sometime soon. Scientists are more involved in utilizing this technology to explore the mesosphere. This high atmospheric region is notoriously challenging to study.

The researcher's breakthrough almost imitates the revolutionary propellers that allow using magnetic or light technology without using fans, power, and combustion to travel.

"Sometimes it's called ignorosphere in [a] joke," Igor Bargatin, a mechanical engineering professor at UPenn, told Wired. Unfortunately, the researchers didn't have access to it. "You can send a rocket for a few minutes at a time, but that's very different from doing measurements using airplanes or balloons," Bargatin added.

However, with the recent breakthrough, researchers aim to build a flight device that will use the light-powered hovering technology to bring small sensors into the mesosphere.

Is it Going to Hover On Mars?

NASA wants to invest in Mars science technology's potential applications, mainly because the temperature in the atmosphere of the Red Planet is similar to the Earth's mesosphere, raising the possibility that lightweight, light-powered levitators can help to collect temperature and composition data.

"You can just take off once per day and go up and then come back down and land on your little Martian lander," said Paul Newman, chief scientist of Earth Sciences at NASA's Goddard Space Flight Center. "We don't have that information on Mars. That would be fantastic."

Before then, what we're going to have to do is settle on a space helicopter to travel to the Martian surface shortly.