A team of scientists made an unprecedented report on a "space hurricane" following satellite observations on the rain of electrons on the upper atmosphere, suggesting that other planets could host similar events.

While researchers have already reported hurricanes in the lower atmospheres of other planets - Mars, Jupiter, and Saturn, a "space hurricane" remains elusive - until now. A space hurricane refers to hurricane-like swirling patterns but found on the upper layers of a planet's atmosphere. 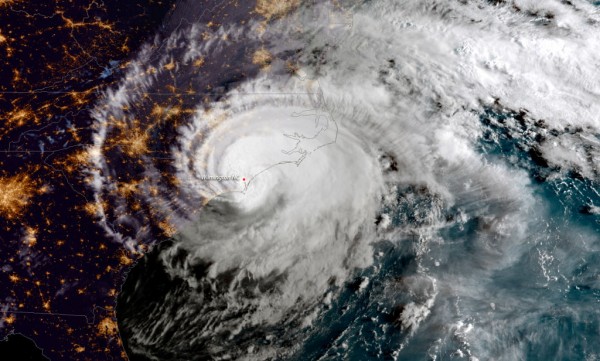 (Photo: Photo by NOAA via Getty Images)=)
IN SPACE - SEPTEMBER 14: In this NOAA satellite handout image was captured at 7:45 a.m. ET shows Hurricane Florence as it made landfall near Wrightsville Beach, North Carolina, on September 14, 2018. The National Hurricane Center reported Florence had sustained winds of 90 mph at landfall and was moving slowly westward at 6 mph.

The team from Shandong University, led by Qing-He Zhang, made the report after using satellite data to make the first observation of a space hurricane following an analysis of a 621-mile wide mass of swirling plasma directly over the Earth's northern magnetic pole. Whereas the usual Earth hurricanes we experience are seen as swirls of air, the space hurricane contains plasma-ionized gas found across the Universe. Furthermore, instead of raining water, it rained electrons.

Observations revealed the cyclone-shaped auroral spot, with a similarly zero-flow center - like the eye of the storm - surrounded by strong and swirling plasma flows.

In their report titled "A space hurricane over the Earth's polar ionosphere," published in the journal Nature Communications, researchers reported the event imparting "large energy and momentum deposition into the ionosphere despite otherwise extremely quietly conditions."

Their observation from August 2014 describes a "relative stable northward" interplanetary magnetic field (IMF) that had a cyclone-like auroral spot with a diameter of over 621 miles (1000 kilometers). It also had multiple arms extending from the center, with the giant hurricane following an anti-clockwise rotation. The observations were made by four Defense Meteorological Satellite Program (DMSP) satellites - fitted with an F16 Special Sensor Ultraviolet Spectrographic Imager (SUSSI).

Researchers also noted that when the high-latitude lobe region exhibits a pulsed or quasi-steady reconnection for several hours, the space hurricane's field lines gradually return to their previous position and begin a new cycle of magnetic reconnection, forming a cyclone-shaped funnel of field-aligned currents.

To further examine the possible formation of a space hurricane, researchers designed a simulation using high-resolution 3D magnetohydrodynamics. In recreating a 3D model of the phenomenon, they described the hurricane's main features better and described a series of events that explains its formations.

Mike Lockwood, a professor at the University of Reading, added that these space hurricanes might be a universal phenomenon, occurring on planets and moons that maintain a layer of plasma and those with magnetic fields.

"Until now, it was uncertain that space plasma hurricanes even existed, so to prove this with such a striking observation is incredible," Lockwood adds. "Tropical storms are associated with huge amounts of energy, and these space hurricanes must be created by unusually large and rapid transfer of solar wind energy and charged particles into the Earth's upper atmosphere."

Researchers also indicate that a space hurricane, which opens a "rapid energy transfer channel from the space" to the layers of the ionosphere and thermosphere, could also help explain space weather phenomena like satellite drag and high-frequency disturbances.

Check out more news and information on Meteorology in Science Times.