These highly-charged solar energetic particles have been known to disrupt satellite and electronics systems and could even cause radiation hazards for astronauts and people riding aircraft. To better understand this phenomenon and develop more effective shielding materials, scientists have searched for solar energetic particles' origins - hoping to predict their nature and trajectory when they next hit Earth. 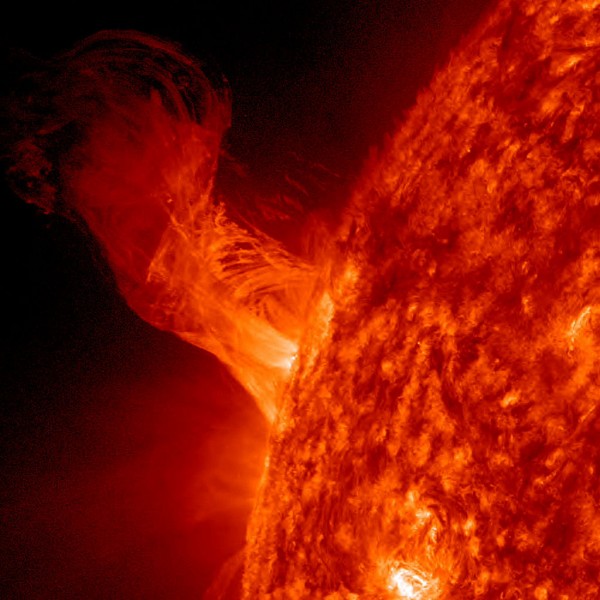 (Photo: Photo by NASA/SDO via Getty Images)
IN SPACE - DECEMBER 31: In this handout from NASA, a solar eruption rises above the surface of the sun on December 31, 2012, in space. According to NASA, the relatively minor eruption extended 160,000 miles out from the Sun and was about 20 times the diameter of Earth.

Researchers from University College London in the UK and George Mason University conducted a study on these solar energetic particles directed towards Earth. They discovered that the particles in the study exhibit a similar "fingerprint" as the plasma found in the lower parts of the Sun's corona, near the chromosphere - the middle layer between the corona and the photosphere. They detail their findings in a report titled "The source of the major solar energetic particle events from super active region 11944," published in the latest Science Advances.

The origin, formally designated as active region AR-11944, has frequent solar flares and coronal mass ejection events. It is one of the largest active regions in the Sun known to man, with an extremely strong magnetic field. Images of the region are characterized by a cluster of dark spots on the surface of the Sun.

"In our study, we have observed for the first time exactly where solar energetic particles come from on the Sun," says Dr. Stephanie Yardley, co-author of the study from the UCL Mullard Space Science Laboratory (MSSL). She adds that the evidence they gathered supports previous theories that the solar energetic particles do come from plasma contained in the lower parts of the Sun's atmosphere by strong magnetic fields. Once released, these particles are further propelled by explosions, allowing them to travel thousands of kilometers per second.

Dr. Yardley adds that these particles from the Sun could reach Earth in a matter of minutes to "a few hours," with the bombardment events lasting for days. She noted, however, that the current understanding of the particles limits forecasts as they take place since predicting them remains a challenge. She explains that by understanding how these particles are created, scientists have a better shot at predicting them and reducing risks through solar processes.

On the other hand, Dr. David Brooks, lead author from the GMU and an honorary associate professor at the UCL MSSL, shares that their observations offer "a tantalizing glimpse" into where solar energetic particles come from based on the last solar cycle. As the sun begins a new solar cycle, they intend to use the techniques gained from this study to verify their data.

Researchers used measurements from the NASA Wind Satellite, situated strategically between the Earth and the Sun, to gather the necessary data to analyze streams of solar energetic particles from January 2014. The gathered data are compared to spectroscopy data from the Hinode spacecraft from JAXA - the Japanese Aerospace Exploration Agency.

Check out more news and information on The Sun in Science Times.