Researchers from the National Institute of Standards and Technology (NIST) developed a new kind of accelerometer that relies on lasers instead of mechanical strain to generate input.

In its most basic sense, an accelerometer is a sensor that measures proper acceleration - or the rate of change in a body velocity with respect to its own instantaneous rest frame. It is used in automobiles, particularly in deploying airbags once the driver suddenly steps on the brakes, creating a sudden change in velocity. From modern smartphones to navigational systems used in missiles and aircraft, an accelerometer has helped objects detect these objects position and movement. 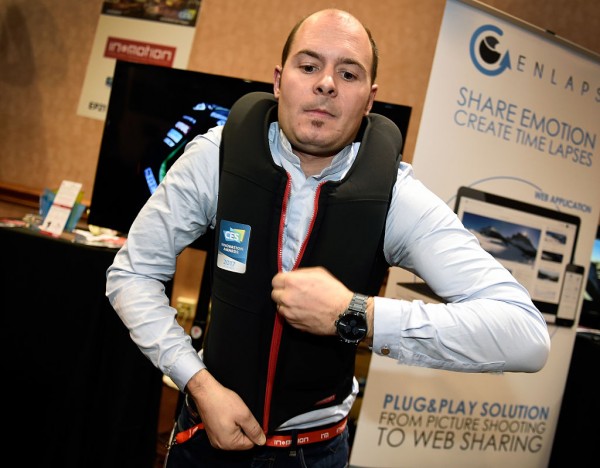 (Photo : Photo by David Becker/Getty Images)
LAS VEGAS, NV - JANUARY 03: Pierre-Francois Tissot wears an In & Motion smart motor bike vest during a press event for CES 2017 at the Mandalay Bay Convention Center on January 3, 2017 in Las Vegas, Nevada. The vest works like a personal airbag by monitoring the rider and if it senses a fall will automatically inflate.

ALSO READ: New Smartphone App Can Tell If You're Drunk

Creating Accelerometers Based on Lasers

While there have been accelerometer designs based on light, instead of the conventional mechanical strain, the new NIST design allows for a straightforward measuring process, leading to more accurate readings. Only about a mere millimeter thick, the optomechanical accelerometer can also operate at a wider frequency range and has been tested rigorously as a part of validating its functionality.

Furthermore, since it no longer relies on mechanical input - usually the squeezing of vibrating upon a piezoelectric surface - it no longer needs the time-consuming process of periodic calibration. Mechanically actuated accelerometers use materials that are in contact with each other and degrades over time. With lasers of a specific frequency as the sensory input for the new NIST accelerometers, it even opens the possibility of this optomechanical accelerometer as a reference standard in calibrating conventional accelerometers currently available.

The newly developed sensor is a part of the institute's NIST on a Chip (NOAC) program, which aims to bring "world-class measurement-science technology from the lab to users anywhere and anytime."

Whereas conventional accelerometers use the position of a freely moving mass in relation to a fixed reference point, the new NIST accelerometer uses infrared light to detect changes in the distance between two highly reflective surfaces. The equivalent of the proof mass - the freely moving mass in conventional accelerometers - is supported by a mirrored surface in the new NIST device. The other is a fixed concave mirror especially fabricated for the application.

With the two reflective surfaces and the gap between them, the infrared light of a particular wavelength can bounce back and forth between the mirrors. The wavelength of the lasers, determined by the distance between the surfaces, is measured and used to determine acceleration.

To further maintain a watchdog on the resonant wavelength from the cavity, researchers added a single-frequency laser that is locked in the closed space.

Check out more news and information on Sensors in Science Times.