A woman was surprised to find a huge python devouring an equally large bat in her backyard in eastern Australia.

Tova Ferris, resident of North Lakes - a suburb in the Moreton Bay Region, Queensland, about 16 miles (26 kilometers) north of Brisbane - captured the shocking event in images and video footage uploaded on her Facebook page. The python, ganging from a tree branch, is shown crawling its way up as it tries to swallow its prey - a giant bat - whole. 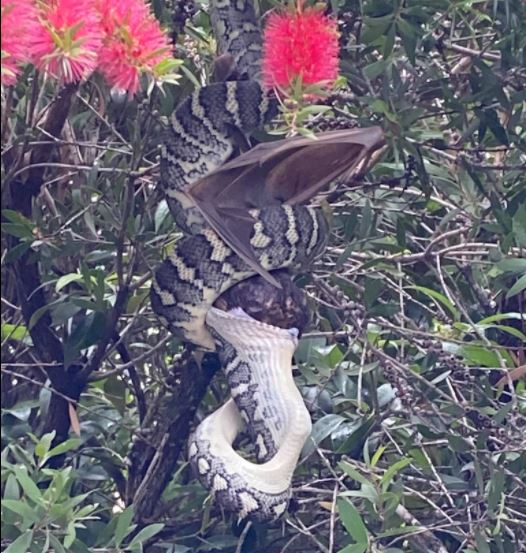 "S**t myself finding this hanging in my tree this morning eating a bat," the Australian woman wrote, including a bat and a shocked face emoji, on March 3. "At least I have something to do today."

In an interview with news portal Newsweek, Ferris shared that she first saw the python while sitting outside while having her coffee cup. She recalls hearing a weird sound, one of a squawking noise unfamiliar to her. When she looked to her right, she saw the giant snake in the process of devouring the bat.

"At first, I panicked and moved away real quick but then was amazed at what was happening in front of me," Ferris told Newsweek.

What made the incident so surprising is that in her fifteen years of living in her North Lakes residence, she has never seen even a single snake in her backyard, stressing that she has never witnessed "anything like this" before.

While bats are common in the area, she adds that snakes are not, saying that their neighborhood is a suburban area - different from the bushy, hinterland-type parts of the Australian mainland where pythons are a much more common sight.

She recalls the python being of a "decent size," devouring the bat for about two hours. After that, it began slithering up the tree, where it rested for another two hours. When Ferris checked out the snake, it was "long gone," and that she didn't know where it went.

Pythons are generally native to the Old World, particularly in Asia, Africa, Australia, and Oceania. However, Burmese pythons - originally from Southeast Asia - have found their way through the United States and have been thriving in great numbers in the Florida Everglades, a swampland with environments similar to its native habitat.

Because of their great weight and size, they generally "scoot forward" when moving, technically described as a "rectilinear progression" kind of motion.

As predators, pythons are nonvenomous hunters, unlike most species of snakes. They do, however, wait in ambush and bite their prey to trap them before coiling their long bodies to constrict prey to death. While it has long been believed that pythons kill prey by crushing their bodies as the giant snakes tighten their grip, a 2015 study revealed that boa constrictors actually use the constriction to overwhelm the prey's circulatory system, rendering them immobile and kills them in most cases.

Once the prey no longer fights back, pythons begin extending their flexible jaws and start swallowing the prey whole, often head first. Once the meal is completely eaten, pythons rest in a temperate environment as they digest their prey.

Check out more news and information on Snakes in Science Times.