Robot Tattoos Woman Remotely While Artist is 300 Miles Away

A lady in the Netherlands got a tattoo from a tattoo artist more than 300 miles away in the United Kingdom. Thanks to 5G wireless infrastructure and cutting-edge robotics. 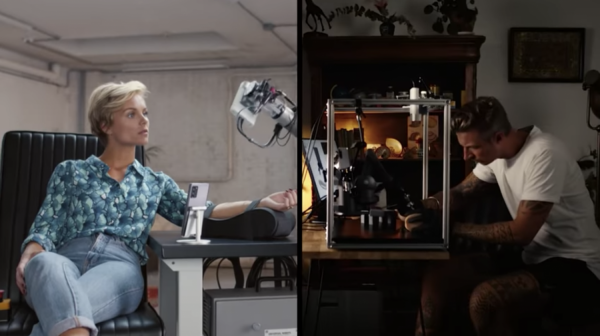 (Photo: YouTube/T-Mobile Nederland)
‘The Impossible Tattoo’ by T-Mobile Netherlands offers a glimpse at the possibilities enabled by the 5G network, with the first-ever remote tattoo placed successfully in real-time onto human skin.

T-Mobile Netherlands and London-based technologist Noel Drew arranged the futuristic stunt as part of a publicity push to illustrate the potential of 5G.

Wes Thomas, a London tattoo artist, was enlisted to handle the robot appendage, which was fitted with a tattoo needle, to mimic one of his geometric patterns on the inner forearm of Dutch actress Stijn Fransen. IFL Science said the actress got a minimalist, small tattoo as a result.

"The 5G tattoo may have been a world first, but it was [also] an authentic use of cutting-edge technology, combined with an ancient art, to tell a very human story," Drew told PCMag earlier this month.

How The Robot Placed A Tattoo Remotely

Drew clarified that the procedure was unique because any aspect of the project had to be custom-designed and assembled for this specific purpose.

Drew's team at international architecture studio The Mill rigorously tested the technology for safety and precision over six weeks last year. He jokingly said, "many butternut squash were harmed" during the test cycle before it was perfected and ready for reality.

Thomas collaborated closely with the developers to improve the robot arm's methodology and provide advice on the particular challenges of tattooing on human skin.

ALSO READ: Check Out Tattoo Pain Chart Showing Where You'd Probably Get Hurt Most or Least

Drew, who confessed he had never explored the complexities of tattooing before, said, working with Wes was "interesting and frightening" at the same time.

He didn't realize there was "too much else to remember," such as the fact that tattoo needles are usually dipped in ink for each stroke. Drew's team instead created an alternative ink-reservoir method because replicating this movement would have been "a nightmare."

Another interesting difficulty was attempting to replicate how tattoo artists manipulate skin to achieve the cleanest, most accurate lines possible.

"The tattoo artist has a detailed knowledge of human skin, which varies widely based on where it is on the body and from person to person," Drew explained.

Fransen's skin was artificially pulled taut with bandages, and her arm was strapped to the chair in case she was tempted to squirm, which was eventually solved.

Will This New Trend Roll Out Soon?

Drew has confirmed that he does not think robotic tattooing would become popular anytime soon, if ever.

"With this robot-led idea, I wasn't trying to replace conventional tattooing [or] the human part of tattooing," he said. "I've avoided seeming to trivialize the art form, particularly after gaining such a thorough understanding of it."

As a "memento" of the experiment, the scientist even sat in the "hot seat" to get his own ink. He said it's the symbol for an incandescent light bulb, an apt crossover between science and imagination, even though some people believe it's a Pokémon reference.

RELATED ARTICLE: First Time in the World: Demonstration of Ultra Pressure Sensor Attached to the Fingertips

Check out more news and information on Technology on Science Times.