Could Saturn's Moon Titan Give Hope for Life Beyond Earth? Here's What Scientists Say

New research shows that organic compounds on Saturn's moon Titan could produce a good contender in the quest for life outside Earth. 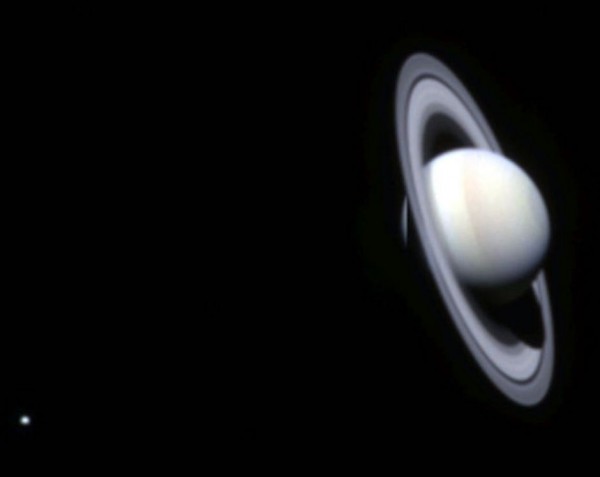 (Photo: NASA/Getty Images)
IN SPACE - OCTOBER 21: The planet Saturn is seen in the first color composite made of images taken by NASA's Cassini spacecraft on its approach to the ringed planet, October 21, 2002. The probe's arrival is still 20 months away. The planet was 285 million kilometers (177 million miles) away from the spacecraft, nearly twice the distance between the Sun and Earth when Cassini took images of it using various filters.

Léa Bonnefoy, a planetary scientist and Titan researcher at the University of Paris, told Science Magazine the latest discovery is very "exciting." The study is called "Exploring Habitability Conditions in Titan's Impact Record: The Formation of Menrva Crater."

Planetary geologist Rosaly Lopes of NASA's Jet Propulsion Laboratory in California said organics are very important for the possibility of life on Titan.

Lopes told Reuters many astronomers believe organic materials will reach deep into the ocean's salt water, providing nutrients for life if it originated there.

CNN said NASA declared ocean planets, such as Saturn's moons Titan and Enceladus, and Jupiter's moon Europa, as the possible sites to discover life outside our planet.

Since 2012, when NASA's Cassini mission measured sight differences in the moon's tides, scientists have speculated an ocean lies some 100 kilometers under Titan's crust.

A multinational team of researchers from Brazil, Canada, the United States, and France studied the impact craters seen on Titan's surface to see what would happen if a meteor or comet collided on the planet.

They discovered that these impacts produce heat, causing a puddle to form in the ice crust, allowing the organic compounds to interact with liquid water.

"If you have a lot of liquid water creating a temporary warm pool on the surface, then you can have conditions that would be favorable for life," Bonnefoy said. "If you have organic material cycling from the surface into the ocean, then that makes the ocean a bit more habitable."

The scientists developed a model of an impact similar to the one that created Menrva, the moon's largest crater, which is 264 miles deep. The liquid water created by such an effect will not last indefinitely, just for about a million years - long enough for bacteria to evolve.

Will Experts Also Test Other Elements on Titan's Surface?

Titan has other liquids on its surface, and if you went for a visit, you'd see common things like lakes and weather systems, like rain. Although these aren't made of water; instead, they're made of molten methane.

Researchers are also interested in these elements. Recent findings have shown that Titan's biggest liquid methane sea, Kraken Mare, is at least 1,000 feet deep and may be explored by a submarine.

Titan, according to Reuters, is the only planet in the solar system other than Earth that has solid liquids on its surface. The surface has methane-rich lakes and seas in its polar regions. Hilly and rocky areas make up 14% of Titan's surface and are believed to be exposed parts of Titan's water-ice crust.

Digital Trends said NASA plans to send a drone named Dragonfly to Titan in 2027. The drone would examine this unique moon more, so we will finally get a closer look at this fascinating site.