2,500-Year-Old Mural is the Earliest Record of Salt as a Commodity Among Mayans

The oldest documented record of salt being used as a commodity is found in the remains of the Maya civilization, in a 2,500-year-old mural in Calakmul, Mexico.

In the ancient painting that captures everyday life in the ancient Maya civilization, a salt vendor offers what is presumed as salt cake wrapped in leaves to another individual that holds a large spoon over a woven basked, presumed to be containing loose and granulated salt. This artwork marks the earliest record of sold being sold at a Maya civilization marketplace. 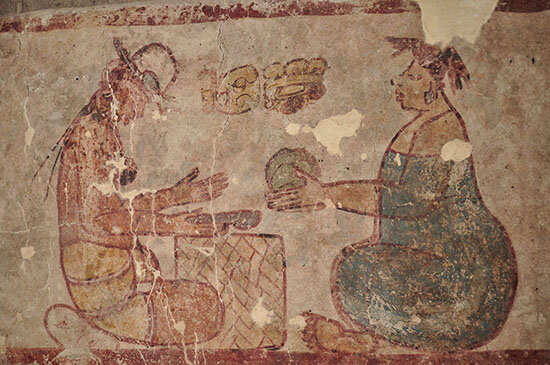 Salt is considered a valuable commodity for being a necessity and for preserving food, especially in some cities of the Maya where distribution is limited. Researchers propose theories on how salt has been collected and traded across the Maya civilization in a study titled "Salt as a commodity or money in the Classic Maya economy," appearing in the Journal of Anthropological Archaeology.

In the accepted paper, Heather McKillop, author of the study and archaeologist from Louisiana State University, explains that the classic Maya civilization made their salt by boiling brine - a solution of salt and water - in pots over fires in salt kitchens. Back in 2004, McKillop discovered the first remnants of ancient salt kitchen buildings belonging to the Maya civilization, constructed from pole and thatch that were found submerged and preserved in a saltwater lagoon within a mangrove forest in Belize. Since then, she and a team of LSU undergraduate and graduate students and fellow archaeologists have mapped around 70 sites that together make up a large network of buildings of the so-called Paynes Creek Salt Works.

Additionally, salt cakes might have been transported through the use of canoes traveling along the coast and up rivers in southern Belize in Central America.

"I think the ancient Maya who worked here were producer-vendors, and they would take the salt by canoe up the river," adds McKillop, who also serves as the Thomas & Lillian Landrum Alumni Professor in the Department of Geography & Anthropology at LSU, in a press release from the university.

The team has investigated hundred of pottery pieces, including 449 rims of ceramic vessels believed to be used in the salt-making process. Based on the scans taken from the Belize site, two of the graduate students in her team could replicate the pottery using 3D printing techniques. It revealed the standardized size of the ceramic pots used by the Maya civilization, suggesting that they also made standardized units of salt, which were most probably used as a standardized unit of commerce.

The Maya civilization flourished in the area that now covers the southeastern part of Mexico, as well as Guatemala and Belize, and western parts of Honduras and El Salvador. Its first developments as a prehistoric civilization were traced to the Archaic period, or before 2000 BC. Their civilization survived and retained most of its defining characteristics - such as its sophisticated writing system and customs and traditions - until the time of the Spanish Conquest in the 16th century.

Check out more news and information on Maya Civilization in Science Times.