The Centers for Disease Control and Prevention announced it is still investigating the deadly Salmonella outbreak it warned about in late February which resulted in 22 illnesses, eight hospital admissions, and one death across seven states in the United States.

The agency also said that if one decides to buy a pet turtle, there are proper ways to keep himself safe.

According to a SlashGear report, every few months, a Salmonella outbreak occurs that's unavoidably associated with animals, usually the adorable ones like turtles and hedgehogs that people may keep as their pets.

Every time the CDC is publishing a 'to-do list' with these pets alongside its advisory on the outbreak, there is an essential piece of information that instructs to stop kissing high-risk animals.

It can't be denied that turtles are quite adorable. However, one should resist the impulse of kissing them, according to the CDC, as they are also likely to give them Salmonella infection even if they seem clean and healthy. 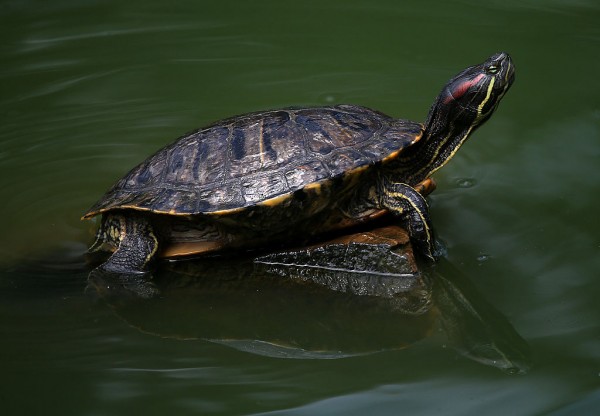 (Photo: Justin Sullivan/Getty Image)
According to a report, a Salmonella outbreak occurs, that’s unavoidably associated with animals, usually the adorable ones like turtles and hedgehogs that people may keep as their pets.

For proper handling of turtles, the agency said, people should wash their hands using soapy water after touching or taking care of their pet turtle.

Moreover, turtles need to be kept away from places where food is being prepared or eaten. The CDC also discouraged snuggling a pet turtle nor kiss it, as well.

Turtles can transfer Salmonella directly to a human's mouth, resulting in illness. Also, the agency has noted that small turtles with shells below four inches in diameter are prohibited by the Food and Drug Administration (FDA) and they should not be purchased.

In a 2020 report, the agency posted on its website that turtles can carry Salmonella germs in their droppings despite their healthy and clean appearance.

Such germs can easily spread through their bodies, tank water, and habitats. More so, humans can turn ill after touching a turtle or anything found in their habitats.

The 2020 report also specified that a total of 26 individuals infected with the outbreak variant of Salmonella Oranienburg were detected and reported in 14 states.

In connection to this, eight hospital admissions were also reported although no mortalities were reported at that time.

All laboratory, epidemiologic, and 'traceback' evidence specified that contact with pet turtles was the possible source of this Salmonella outbreak.

In interviews, 16 or 73 percent of 22 sick people reported they had contact with a turtle. The outbreak variant was found in samples collected from the habitat of a pet turtle.  This particular outbreak's investigation closed in early January 2020.

Most people contracting Salmonella infection develop fever, stomach cramps, and diarrhea six hours to six days from exposure to the microbes. Typically, the disease lasts four to seven days and most people recover minus the treatment.

In some people, the disease may be quite severe that they need to be admitted to the hospital. Salmonella infection may transmit from the intestines to the bloodstream, then, to other parts of the body.

Meanwhile, children below five years of age, adults who are 65 years and older, and those who have weakened immune systems are more likely to suffer from severe illness.

Related information on how to avoid catching Salmonella from a pet turtle is shown on Howcast's YouTube video below:

RELATED TOPIC: Watch Out For Falling Iguanas This Christmas Day

Check out more news and information on Turtles and Salmonella on Science Times.