South Korea Wants to Land Rockets on Moon by 2030

South Korea has pledged to launch its first robotic lunar lander on a homegrown rocket by 2030. 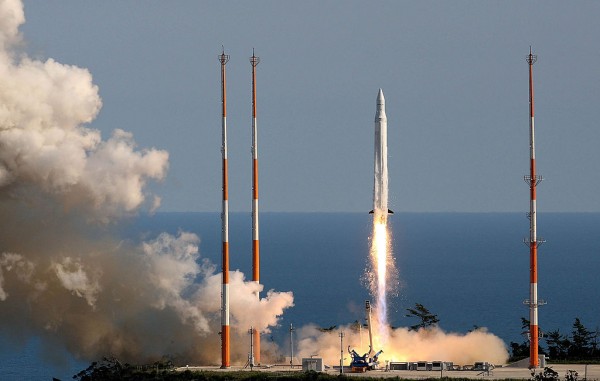 (Photo: Kim Yang-Bae-pool/Getty Images)
GOHEUNG-GUN, SOUTH KOREA - AUGUST 25: The first home-launched satellite of South Korea, carried by rocket "Naro (KSLV-I)", is launched from Naro space center on August 25, 2009, in Goheung, South Korea. The country's first space rocket carries a payload of a scientific satellite and has been twice postponed due to the technical problems. Seoul says its rocket is part of a peaceful civilian space program rejecting any comparison with Pyongyang's rocket launch earlier this year.

The third and final test of the 200-ton rocket's four 75-ton liquid engines was completed successfully by the Korea Aerospace Research Institute.

At the Naro Space Center in Goheung province, the Korean space agency tested a rocket called Nuri. Nuri, the company's second debut, will take place in May of next year. It's the case. Its mission is to transport a 1.5-ton satellite.

KARI said the successful test placed the rocket on track to launch with a mock payload in October.

What is South Korea Trying to Do With Space Launch Vehicles?

Korea Portal said the nation has wanted to build locally produced space launch vehicles with a budget of nearly 2 trillion won ($1.8 billion) since 2010.

Seoul requested assistance from Russia for a satellite mission in 2013, according to UPI. The report referred to the KSLV 1 rocket, which was part-Russian and part-Korean and launched from Naro.

Due to delays in the construction of Nuri, including improvements in the assembly phase in the first stage and procurement delays, the government agreed last year to postpone the launch, which they initially scheduled for February.

The state-funded space institute partnered on the 500-kilogram satellite with a consortium of industry collaborators in 2015. They shared the key technology and information with the latter from the outset, marking the first time it has occurred.

After the launch next year, South Korea's next target is to land on the Moon with its own projectile by 2030, Moon said per SpaceNews. The South Korean chief executive said that he wants local businesses to become leading aerospace manufacturers.

Moon emphasized the importance of the private sector in Korea's space exploration efforts. To that end, he claimed that the government would increase efforts to create an "innovative industrial environment that nurtures global space companies like SpaceX."

With a long-term ambition and unwavering will, Moon said South Korea would boldly invest in space production and reach into the space sector with scientists and engineers.

In the run-up to the launch of 6G cellular networks, self-driving cars, and other goods and services supported or improved by satellites, the South Korean President also raised the question of improving the international competitiveness made-in-Korea satellite systems.

"We will continue to develop technological prowess by establishing a pilot network of communication satellites to usher in the 6G era, a Korean-engineered satellite navigation system essential for the autonomous vehicle and drone industries, and a nanosatellite constellation system to strengthen our space-related national defense," he said.

Moon's speech comes after his administration pledged in February to spend 615 billion Korean Won ($553.1 million) on space operations in 2021, to improve South Korea's ability to manufacture spacecraft, missiles, and other critical equipment.