Virgin Galactic just unveiled the VSS Imagine, its second piloted space plane described as a shiny silver vehicle. Like the VSS Unity, its other spacecraft, VSS Imagine, is designed to take humans and scientific experiments to and from suborbital space.

According to a Space.com report, the newcomer though is the first of the next-generation SpaceShip III line featuring upgrades that will allow enhanced performance when it comes to maintenance access and flight rate.

In addition, this SpaceShip III design features a change too, that, while dramatic, is simply skin-deep, a mirror-like livery reflecting the surroundings of the vehicles from the ground all the way up to space and back.

In a statement, the Virgin Group founder, Richard Branson said that as a SpaceShip III is a vehicle class, Imagine is not just as beautiful in appearance but it represents the growing fleet of spaceships of Virgin Galactic as well.

ALSO READ: Virgin Galactic Will Not Be Launching Tourists to Space This Year Due To Technical Delays 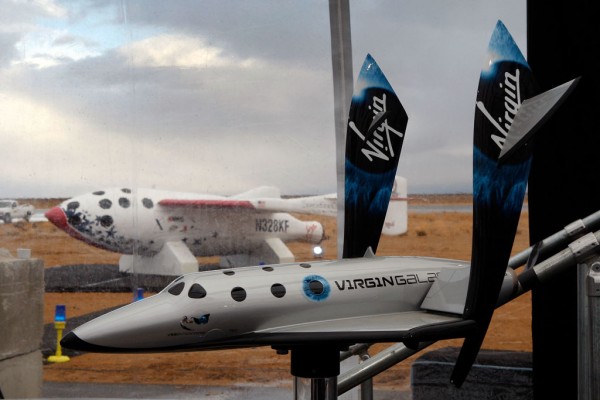 (Photo: David McNew/Getty Image)
A model of SpaceShipTwo is seen with the original SpaceShipOne visible outside as Virgin Galactic unveils its then-new SpaceShipTwo spacecraft at the Mojave Spaceport on December 7, 2009, near Mojave, California.

All great achievements, changes, and creations Branson explained, begin with an idea. He added that their hope is for all those traveling to space to go back with fresh perspectives and new ideas that will bring positive change to Earth.

A Space.com article described VSS Unity as a SpaceShipTwo vehicle. SpaceShipOne, the pioneering design, won the $10 million Ansari X Prize in 2004 after it made two manned flights to suborbital space and back in a two-week span.

Two-pilot, six-passenger space planes Unity and Imagine are designed to lift off underneath a carrier aircraft's wings, dropping them at a roughly 50,000-feet altitude. At that point, each onboard rocket motor of the spacecraft lights up, blasting it up to suborbital space.

Passengers of Virgin Galactic will not circle this planet like astronauts aboard the International Space Station or ISS do.

Nevertheless, they will get to experiences a few minutes of weightlessness and see the Earth's curve against the space's blackness.

Company representatives have disclosed, over 600 individuals have already booked a ride with Virgin Galactic as of this writing at a price of $250,000 per seat.

Unity at its 3rd Spaceflight

Unity and Imagine are at New Mexico-based Spaceport America, the commercial hub of Virgin Galactic. Meanwhile, company representatives said that Unity is in the last stages of its test campaign and it is expected to launch on another suborbital trial mission, its third spaceflight in all, although first this May, from Spaceport America.

It will be the second crack of Unity at its third spaceflight. The earlier attempt in December last year was terminated after a connection from a faulty computer prevented the onboard rocket motor of Unity from firing up as planned.

Imagine, on the other hand, will start its ground tests soon and will fly to the sky for unpowered 'glide flights' this summer if everything goes well as planned, representatives of the company said.

More so, Virgin Galactic will continue constructing its growing fleet. The Spaceship Company, its manufacturing subsidiary, continues to assemble the third spacecraft at its Mojave, California-based headquarters.

In connection to this, the first two spaceflights of Unity lifted from the nearby Mojave Air and Space port. SpaceShip III, this space news site learned, will be called VSS Inspire.

A similar report is shown on CNET Highlight's YouTube video below: