Diamond Nuclear Battery: Will It Last Up To 28,000 Years?

One startup claims that you'll soon be able to purchase its diamond nuclear-powered battery that lasts up to 28,000 years. That's around 245,280,000 hours! 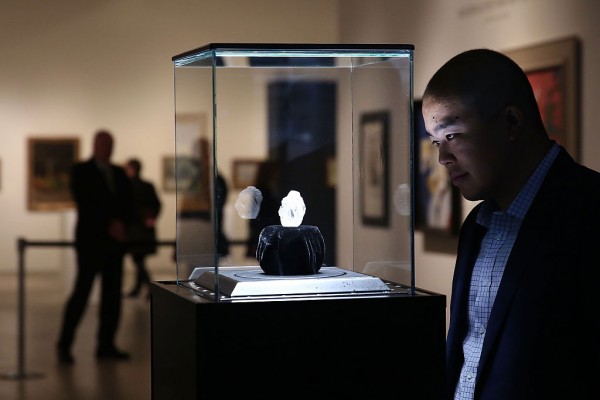 (Photo: Spencer Platt/Getty Images)
NEW YORK, NY - MAY 04: Guards stand next to the 1109-carat rough Lesedi La Rona diamond, the biggest rough diamond discovered in more than a century, at Sotheby's on May 04, 2016, in New York City. The stone was found by Lucara Diamond Corp. last year at its Karowe mine in Botswana. The diamond, which is nearly the size of a tennis ball at 66.4 x 55 x 42 mm and is believed to be about 2.5 billion to 3 billion years old, was named "Our Light" in the local Tswana language. Lesedi La Rona will be offered at auction in London on June 29 and be on display at Sotheby's New York. The diamond could sell for $70 million or more.

Nano Diamond Battery (NDB) is a "high-power diamond-based alpha, beta, and neutron voltaic battery" that can provide devices with "life-long and renewable energy."

At #NDB, we aim to reuse the #nuclear fuel by reprocessing and #recycling to enable #sustainability and promote a clean #energy source in a safe and secure #environment

The company began developing its battery in 2012 and anticipates having a working product by 2023.

How Does it Work?

According to Popular Mechanics, diamonds are excellent at conducting heat, and micro-sized diamonds move heat away from radioactive isotope materials to the point where electricity is generated.

NDB acts like a tiny nuclear generator. The power source for the NDB is IL and HL radio isotopes that are shielded for safety by multiple levels of synthetic diamond. The energy is absorbed in the diamond through an inelastic scattering process, which generate electricity. pic.twitter.com/uiEgHBLU9e

The device could last thousands of years thanks to radioactively contaminated graphite and heat-conducting diamonds. The difference with NDB's concept is that it employs multiple layers of diamond and radioactive waste panels to generate more energy.

Though the long battery life is certainly a plus, each battery cell produces a negligible amount of energy, necessitating using a large number of cells to power regular and larger devices.

The battery will be encased in layers of paneled nano-diamonds to absorb the energy emitted by the isotopes.

Because isotopes have thousands-year half-lives and diamonds are excellent heat conductors, the battery will continue to emit energy without needing to be recharged.

Dr. Nima Golsharifi, co-founder and CEO of NDB, told Future Net Zero in October 2020 that the battery would have two benefits. The first step is to turn nuclear waste into something useful. The second is a timer that could last hundreds of lifetimes.

Is the Diamond Battery Safe?

NDB said on its official page that the diamond battery has a highly sophisticated safety feature covering at least three of the most critical aspects of safety.

First, the polycrystalline diamond encapsulation can contain the isotope's radiation while also protecting it from outside tampering.

Thermal vents will be built into the diamond battery to help regulate thermal conduction within the system.

NDB will also employ a Boron-doped single crystalline diamond (SCD) to maximize the use of neutron radiations by converting extra neutrons into alpha rays.

The SCD within the battery is strategically placed, according to the company, to prevent self-absorption of heat while allowing for rapid conversion to usable electricity.

The company has yet to reveal how much the lifetime battery will cost.