Left or Right-Pawed: Dogs Can Be Just Like Humans With Preference on Using Their Hands

Humans have hand preferences wherein 90% are right-handed and only 10% are left-handed. Scientific research also shows that this is not an exclusive trait to humans because animals, like dogs, also could be left- or right-pawed.

However, the exact number of left-pawed or right-pawed dogs is not known because of the small study sample sizes. But now, the results of the largest-ever study of canine handedness quantified their paw preferences.

The researchers of the study also take into account dogs' sex and the age of the dogs to their paw preferences to find which groups are more likely to prefer using their left or right paw.

The study, entitled "The effect of sex and age on paw use within a large sample of dogs (Canis familiarise)" published in the journal Applied Animal Behaviour Science, also explains how human social influences and pressures affected paw preferences among dogs. 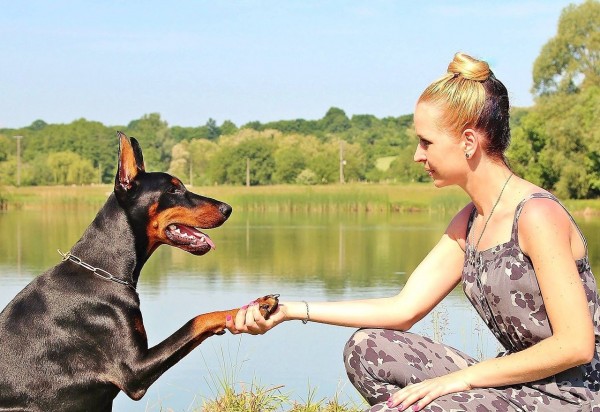 (Photo: Pixabay)
Dogs Can Be Left- or Right-Pawed Too Just Like Humans' Preference On Using Their Hands

Are Dogs Left or Right-Pawed?

Scientists have wondered whether dogs are most left- or right-pawed. The new study determines how many dogs are left-handed and how many are right-handed.

According to Psychology Today, researchers analyzed the data from almost 18,000 dogs performing a food-retrieval task. Researchers told dog owners to prepare a plastic or cardboard tube that is wide enough for a dog's paw and to place a treat at the end of the tube for the dogs to retrieve.

The experiment was repeated three times before owners were asked o describe the behavior of their dogs based on whether the dogs used their left or right forepaw.

Also, the researchers were told to classify their dogs based on their sex and four age groups: puppy, young adult, adult, and elderly.

The dog owners reported that about 74% of the 17,901 dogs in the experiment showed a clear preference on a paw while 26% used both paws equally during the task, Yahoo! Life reported.

Among those dogs who showed paw preferences, 58.3% were right-handed, and 41.7% showed preferences on their left paw. The experiment showed that dogs are more left-handed than humans, wherein only 10% of the population are left-handed.

Researchers also found that preferences on the left paw are more common among male dogs. In terms of age groups, right-pawedness was more common in older male than younger male dogs.

ALSO READ: Are You a Lefty? Scientists Explain Why Only 10% of People Are Left-Handed

Since dogs are known to have paw preferences, what about other animals. Do whales who neither have hands or paws have handedness? What about the octopus who has eight tentacles, which one would it use?

Ruth Byrne, a biologist who's studied handedness in octopuses, said that as long as the brains of a species have two sides, it starts dividing tasks.

According to Discover Magazine, this is called biological chirality, which describes a type of asymmetry that be expressed physically, like have asymmetrical hand size, or through behavioral tendency where a species favor the use of one side over the other.

Researchers said that it could be seen at the individual level or population level. For instance, walruses prefer their right flipper, while some molds more often turn right than left.

RELATED ARTICLE: The Universe is Basically Left-Handed: Here are Some Reasons Why

Check out more news and information on Left-Handed and Dogs on Science Times.