Elon Musk Compares an Object to a Blimp; What Is It? 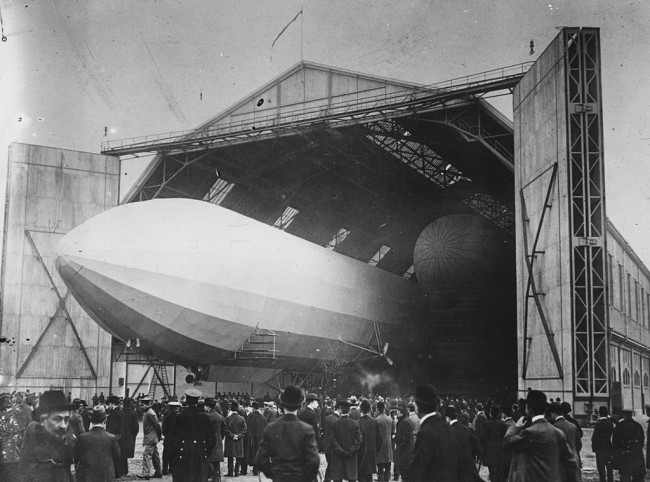 (Photo : Hulton Archive/Getty Images) circa 1914: An airship shed at Dusseldorf.

Looking up close, it seems to be a Good Year air balloon floating high in the atmosphere, and it actually resembles a Blimp in the sky.

Luxury airships as a low-carbon mode of intercontinental transportation would be a good Elon Musk company.

Blimp is a giant aircraft without wings powered by engines and consists of a large bag filled with gas that's lighter than air. Previously, passengers were borne in a frame suspended from the ceiling.

CNBC said these giant flying blimps, also known as airships, were all the rage between the two world wars. However, blimps fell out of style after the Hindenburg disaster in 1937, when the German passenger airship LZ 129 Hindenburg caught fire, killing many people.

With advances by the aerospace industry's most prominent players and new challengers promising to build airships for anything from leisure travel to carrying goods to remote areas of the world, blimps and inflated flying structures are making a comeback.

Besides, the airships are now much safer. They use helium instead of the hydrogen used in the Hindenburg.

The Telegraph said such airships seem ideal for both ends of the market: high-end leisure travel for small groups and disaster relief in remote areas.

Another feather in their cap is their ability to remain aloft for days at a time, making them useful for tracking and surveillance, such as forest fire detection.

Ultracapacitors will provide a brief burst of energy for situations like stabilizing or accelerating an airship and then recover in seconds. They can be used in aircraft built by a French company named Flying Whales.

A few proposals are floating around that suggest completely new concepts, aside from Elon Musk's recent tweet. Some have been around for decades but, according to their supporters, have been unfairly forgotten. Others are focused on new technologies that are still being developed. Some of them are enjoyable. Others may be crucial. Here are some of the most ambitious visions for the future of transportation to round out this collection.

The Hyperloop, a device in which depressurized tubes are sent whizzing around the world at 650mph, is perhaps one of the most bizarre transportation concepts of the last decade.

Elon Musk, the founder of Tesla and SpaceX, gave the project its initial impetus in 2013 with a comprehensive 58-page presentation.

Musk made the term "open source" in 2014, encouraging others to improve it. Since then, a half-dozen or so businesses have taken up the task, including Hyperloop One, which became Virgin Hyperloop One after Richard Branson joined in 2017 and is now Virgin Hyperloop.

Reusable rockets are one reason that space travel has become much less expensive. The cost of delivering a kilogram (2.2lb) into orbit falling costs around $50,000 (£37,722) during the Space Shuttle era to around $1,500 today.

Costs are collapsing, which might make what Musk called "hypersonic travel around the Earth" on board Starship economically feasible.

Elon Musk claims that the Starship's first test flights will take place in the middle of this decade. Passengers will leave a Manhattan dock at 6:30 a.m. and be whisked by boat to a floating launchpad 20 miles offshore for a 7 a.m. blast off to Shanghai. The time to travel is 39 minutes.

The rocket will be enormous in size. Its cabin would be larger than that of the world's largest passenger plane, the Airbus A380, and it would accommodate 1,000 passengers strapped in like on a rollercoaster. Also, the promotional video portrays it as a harrowing experience. "It's basically an ICBM traveling at Mach 25 that lands," Musk admitted.