Astronomers pointed NASA's Hubble Space Telescope at a "celebrity star" that is "waging a tug-of-war between gravity and radiation to prevent self-destruction" on the 31st anniversary of the telescope's launch.

NASA said AG Carinae is one of the brightest stars in the Milky Way, and a glowing halo of gas and dust surrounds it as a result of "life on the edge."

Senior project scientist Dr. Jennifer Wiseman takes us on a tour of Hubble's beautiful anniversary image of the giant star AG Carinae, and highlights some of the telescope's recent achievements!

AG Carinae's snapshot, which you can see below, is an excellent example of a "composite of separate exposures acquired by the WFC3/UVIS instrument on the Hubble Space Telescope."

The people who captured the photo used many filters to sample small wavelength ranges. Color is achieved by assigning different hues (colors) to each monochromatic (grayscale) image associated with a certain filter. 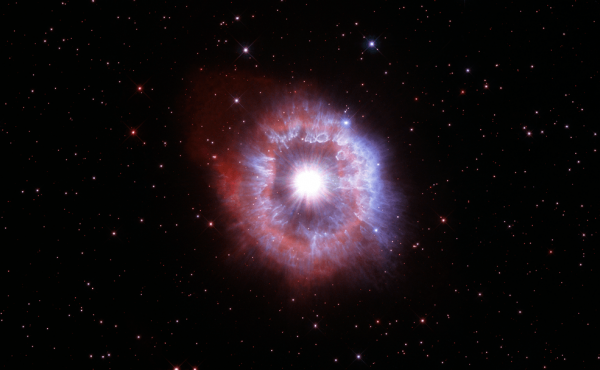 (Photo: NASA, ESA, STScI)
In celebration of the 31st anniversary of the launching of NASA's Hubble Space Telescope, astronomers aimed the renowned observatory at a brilliant "celebrity star," one of the brightest stars seen in our galaxy, surrounded by a glowing halo of gas and dust.

AG Carinae, according to RT, is a luminous blue variable (LBV) star that can be seen 20,000 light-years distant. It is just a few million years old, but it is on the verge of interstellar extinction.

The five-light-year-wide spreading shell of gas and dust that encircled this star was formed by "one of the most massive eruptions around 10,000 years ago." The mass of the material ejected is almost ten times that of our sun.

According to the European Space Agency, which helps run Hubble, the shell, called a nebula. It's around five light-years wide, around the distance between Earth and the closest star outside our sun, Alpha Centauri.

"I like studying these kinds of stars because I am fascinated by their instability," Kerstin Weis, who studies luminous blue variable stars at Ruhr University in Bochum, Germany, said in a NASA statement. "They are doing something weird."

This is a peculiar type of star that "lives early and dies young." They only last for a hundred million years, a brief existence as opposed to the nearly 10-billion-year age of our sun.

AG Carinae is also 70 times the size of our sun and "glows with the dazzling brightness of a million suns."

These outbursts only happen once or twice in the lifetime of a luminous blue variable, and only when the star is on the verge of exploding as a supernova.

NASA included some information about the Hubble Space Telescope at the end of the blog post. They launched Hubble on April 24, 1990, and have made over 1.5 million observations of approximately 48,000 celestial objects throughout their lifespan.

It has completed over 181,000 orbits around the World, covering a distance of over 4.5 billion miles, and its measurements have yielded over 169 terabytes of data. More than 18,000 research papers have been released due to this data, with 900 of them due to being published in 2020.

Hubble has stayed in operation while waiting for the James Webb Space Telescope to replace the telescope.

Thankfully, it remained operational because it is well-positioned to catch AG Carinae's ferocious perfection by observing it in the ultraviolet light spectrum.