Copper remains one of the most used metals, with applications for electrical and electronic wiring and a catalyst used in chemical processes for power plants - and a new method of harvesting copper might be more efficient and safer than existing methods.

A team of researchers from the Cullen College of Engineering and the College of Technology at the University of Houston, together with the University of Sao Paulo in Brazil, have presented their studies on how bacteria discovered in copper mines are capable of synthesizing stable copper, in its single-atom zero-valent form, from naturally-occurring toxic copper ions. 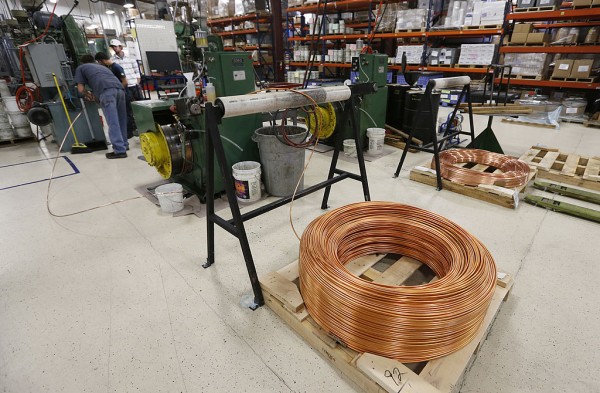 (Photo: Photo by George Frey/Getty Images)
MONA, UT - APRIL 21: A large coil of copper wire sits on the floor waiting to be manufactured into bullets at Barnes Bullets on April 21, 2014, in Mona, Utah. Barnes says it manufactures high-end bullets for hunting and personal protection.

"The idea of having bacteria in mines is not new, but the unanswered question was: what are they doing in the mines?" said Francisco C. Robles Hernandez, one of the authors and a professor at the UH College of Technology, in a news release from the university. To better understand how this works, researchers placed some bacteria cultures under an electronic microscope. They discovered that the bacteria, a copper-resistant strain, converts toxic copper ions into stable copper by isolating the single-atom form of the substance - a process Robles notes as "extremely difficult to derive." Usually, processes to extract a single-atom form of a substance - copper in this case - require harsh chemicals in a costly and labor-intensive process.

Although copper remains in huge demand worldwide, the process involved in harvesting this metal is filled with processes and methods that expose people to toxic exposure and the challenge of extracting substantial volumes for commercial uses. According to the Copper Development Association Inc, there is a global reserve of about a billion tons and an annual output of about 12.5 million metric tons. This is equivalent to about 65 years of the remaining supply. Although it has a large existing supply, experts are still considering the material's scarcity - since the copper in the Earth's crust is still at a limited amount, in addition to the fact that not all manufactured copper is recycled for further use.

The toxic exposure from copper production comes from sulfur dioxide and nitrogen dioxide used in smelting stable copper from its ore.

A New Method For Extracting Copper

"The novelty of this discovery is that microbes in the environment can easily transform copper sulfate into zero valent single atom copper," says Debora Rodrigues, the Ezekiel Cullen Professor of Engineering at the UH Cullen College of Engineering. She also notes that this is a breakthrough towards a cleaner and safer process of extracting stable copper than existing expensive and labor-intensive processes.

With his background in electronic microscopy, Robles examined the samples brought back by Rodrigues from copper mines in Brazil to identify the nature of the copper. Rodrigues adds that while they have only examined a single strain of this copper synthesizing bacteria, there is the possibility of other strains with similar capabilities for turning toxic copper ions into a stable copper material.

Check out more news and information on Copper in Science Times.