Do you want to go to the site of the world's worst nuclear power disaster? Ukraine's government expects so.

The country's culture minister asks that the Chernobyl disaster area be added to the United Nations' list of world heritage sites, which are sites of extraordinary cultural significance. The locations are then designated as protected areas. 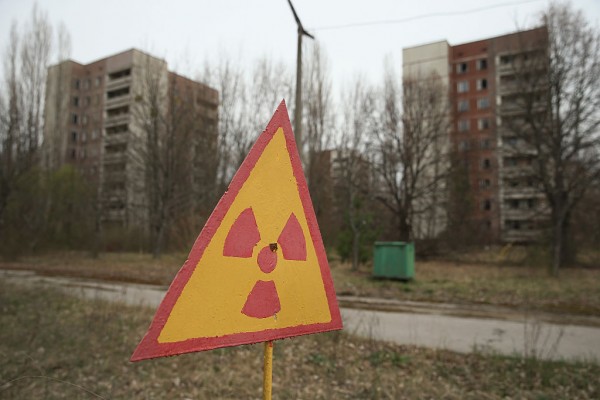 (Photo: Sean Gallup/Getty Images)
PRIPYAT, UKRAINE - APRIL 09: A sign warns of radiation contamination near former apartment buildings on April 9, 2016, in Pripyat, Ukraine. Pripyat, built in the 1970s as a model Soviet city to house the workers and families of the Chernobyl nuclear power plant, now stands abandoned inside the Chernobyl Exclusion Zone, a restricted zone contaminated by radiation from the 1986 meltdown of reactor number four at the nearby Chernobyl plant in the world's worst civilian nuclear accident that spewed radioactive fallout across the globe. Authorities evacuated approximately 43,000 people from Pripyat in the days following the disaster and the city, with its high-rise apartment buildings, hospital, shops, schools, restaurants, cultural center,s and sports facilities, has remained a ghost-town ever since. The world will soon commemorate the 30th anniversary of April 26, 1986, Chernobyl disaster. Today tour operators bring tourists in small groups to explore certain portions of the exclusion zone.

The tragedy triggered by a nuclear reactor accident will be commemorated on April 26 for the 35th time. At the moment, the center was putting its emergency management system through its paces.

Ukraine's culture minister Oleksandr Tkachenko told Reuters that Chernobyl's significance "lays far beyond Ukraine's boundaries." Tkachenko said the site's protection by UNESCO is about more than "commemoration," as he puts it, "but also tradition and people's rights."

The United Nations' cultural body, UNESCO, will determine if it should be designated as a protected area. However, Ukraine must first restore Chernobyl to a national inventory of historically significant sites. It will then proceed with its UNESCO submission.

If the nuclear site and the surrounding town are recognized by UNESCO, Ukraine will be required to make repairs.

A nuclear power plant 2 miles from the city of Pripyat in what was then the Soviet Union (now Ukraine) began to malfunction shortly after midnight on April 26, 1986. Nuclear Energy Agency said the Chernobyl Nuclear Power Plant's Reactor 4 was experiencing problems. The reactor and its emergency cooling center had been turned off for scheduled repair and testing the day before.

However, the test had to be rescheduled. Regardless of the delay, WorldNuclear.org claimed that communication and protection procedures were breached, and the cooling center was turned off. Steam began to heat up in the cooling tanks, resulting in a power rush that the plant's engineers were unable to stop.

At 1:23 a.m., the blasts started, sending a poisonous cloud of nuclear debris into the air over the plant. The blast also sparked a fire, which destroyed another structure and scattered the radioactive cloud in the surrounding areas. Two factory employees died of acute radiation poisoning within the next several hours.

Meanwhile, residents of Pripyat began vomiting and complaining of a metallic taste in their throats. They were not evacuated for another 24 hours after the globe exploded.

HBO, an American television network, created a novel series focusing on the nuclear disaster in 2019. It heightened media awareness of the tragedy. That year, over 100,000 people visited Chernobyl.

Chernobyl Disaster Explained: What Diseases Did This Power Plant Cause?

The World Health Organization reports that the tragedy harmed 5 million civilians in the former Soviet Union. According to other figures obtained by BBC, the radiation itself infected up to 800,000 people in Belarus, a neighboring nation.

University of California San Francisco claimed that the staff who were asked to clear up the mess eventually got leukemia. Lindsay Morton, a National Institute of Health Senior Investigator and co-author of one of the latest Chernobyl reports, told Inverse that people in the surrounding regions were possibly subjected to Chernobyl radiation by "leafy greens and milk. Radiation-contaminated food, including the plants eaten by agricultural animals, contaminated all animal goods created by those animals.

Thyroid cancer cases increased dramatically in the years after the eruption in the surrounding regions. "Iodine is one of the building blocks of thyroid hormones, and the body can't tell the difference between iodine and radioactive iodine," Morton says. As a result, radioactive iodine ingested by a human concentrates in the thyroid."

Thyroid cancer rates rose the most in youth, according to one report published in the journal Lancet. The study, titled "Radiation and Risk of Thyroid Cancer: Fukushima and Chernobyl," claimed that a disturbing trend shows that children under the age of five are "particularly vulnerable to the effects of radiation."

It is not out of morbid fascination that scientists are staring at the fallout from the blast again today. Rather, these experiments try to better explain how radiation can alter genetic content and how exposure affects future generations' genetics. With 440 operating nuclear reactors worldwide, it's important to consider the long-term and generational consequences of ionizing radiation.

RELATED ARTICLE: Present Levels of Radiation in Chernobyl Still Harmful, Even For Bees