The US Centers for Disease Control and Prevention proposed a two-week delay in the use of the Johnson & Johnson (J&J) COVID-19 vaccine earlier this month, following news that six women developed blot clots, and one of them died within two weeks of receiving it. At the moment, about 6.8 million people had received the vaccine.

Centers for Disease Control and Prevention (CDC) said blood clots are very rare. But experts are investigating the cases. Dr. Anne Schuchat, the CDC's principal deputy director, says the pause is meant to prepare the healthcare system to identify and handle patients properly. 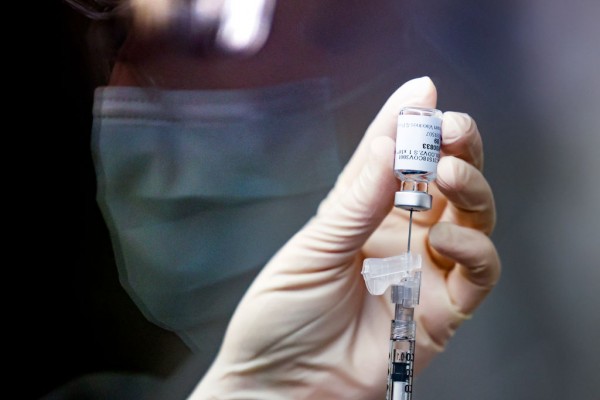 (Photo: Getty Images)
AURORA, CO - DECEMBER 15: (EDITORIAL USE ONLY) Rocky Mountain Regional VA Medical Center investigational pharmacy technician Sara Berech is reflected in the glass of a fume hood as she prepares a dose of the Johnson & Johnson COVID-19 vaccine for a clinical trial on December 15, 2020, in Aurora, Colorado. The Johnson & Johnson vaccine could be submitted for emergency use by late January and is the only vaccine among leading candidates given as a single dose. (Photo by Michael Ciaglo/Getty Images)

So, how concerned should you be about these uncommon occurrences? Experts have now discovered the solution.

Women Ages 18 to 48 Are Affected By Blood Clots

Women between the ages of 18 and 48 have been confirmed to have clots so far. Symptoms appeared six to thirteen days after vaccination. However, Janet Woodcock, the acting commissioner of the Food and Drug Administration, said at a press conference on Tuesday that there isn't enough information to tell if any specific subgroup is more vulnerable at this time.

CDC's Schuchat told NPR there are currently too few cases to know what particular risk factors could predispose someone to develop these clots.

According to the Food and Drug Administration (FDA), the clots are a rare and severe form in the bloodstream that drains the brain. The disorder is known as cerebral venous sinus thrombosis (CVST), and it occurs when blood platelet levels are low.

Headaches, blurred vision, fainting or loss of consciousness, loss of control over movement in a portion of the body, and seizures are some of the signs of CVST.

One in a Million Chance of Getting Blood Clots

Currently, the chance is less than one in a million, according to Wilbur Chen, an infectious disease physician-scientist at the University of Maryland School of Medicine's Center for Vaccine Development and Global Health. However, he told Scientific American that the data might change. Experts will get more clarification on those figures, he said, both in terms of the number of cases and the overall number of vaccines given out so far.

One Fatal Blood Clot Case Out of Six Cases Confirmed

CDC recorded one fatal incident out of six confirmed cases. The said patient is in serious condition.

Reports said the woman who died after receiving the vaccine appears to be defined in the CDC's Vaccine Adverse Event Reporting System. Documents obtained by NPR that a 45-year-old woman in Virginia received a Johnson & Johnson shot in early March. She developed a massive headache a week after having the shot and had to go to the hospital for treatment. She died two weeks after receiving the vaccine due to blood clotting and a reduced platelet count.

FDA officials said their best hypothesis at the moment is that these reactions are unusual autoimmune reactions. They stress how "very rare" these occurrences are.

These events, according to Chen, have not cast any doubt on the vaccines' efficacy.

Clinical trials using Johnson & Johnson and Novavax vaccines in South Africa have shown lower efficacy for symptomatic COVID-19 than in other locations where this variant is less common, according to Livemint.

However, one promising feature of the Johnson & Johnson vaccine trials was that the efficacy against extreme covid-19 was greater than 80% in both the US and South Africa. The most significant aim of vaccines is to keep people alive and out of hospitals, and this vaccine appears to accomplish that goal.

They are distinct from the fatigue, soreness at the injection site, and joint aches that many people feel shortly after receiving their vaccine. These types of reactions are normal, and they typically occur within three to five days of receiving the vaccine. The signs of blood clots usually occur a week or two after the vaccine and then begin to worsen. One symptom is a headache that won't go down.

Now, if you've just exercised yourself by going for a run or gardening in the sun on a hot day, you may experience headaches, nausea, leg or abdominal pain, or shortness of breath. But these will likely subside if you sit in a cool place and drink some water. However, if you have these symptoms and they're getting worse despite the fact that you're doing things that should make you feel better, that's cause for concern. Experts advise that you discuss your care options with your doctor.

Despite the blood clots, WHO experts claim Johnson and Johnson's COVID-19 vaccine appears to protect against coronavirus variants that are causing concern. The EU, US, Canada, and South Africa have all given their approval to the vaccine, DW.com said.

The COVID-19 vaccine, developed by Johnson & Johnson in the United States, has proven to be successful in countries where coronavirus variants are circulating, according to UN health agency advisers.