Four astronauts onboard the International Space Station prepared their SpaceX Crew Dragon capsule on a fiery dive to a pre-dawn splashdown in the Gulf of Mexico Sunday. They are expected to bring SpaceX's groundbreaking touch-screen ferry ship's first operating flight to an end. 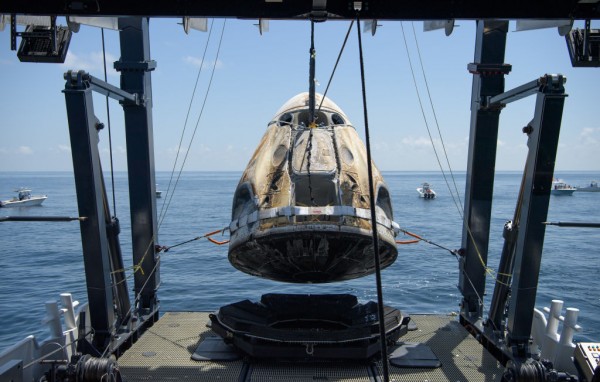 (Photo: Photo by Bill Ingalls/NASA via Getty Images)
GULF OF MEXICO - AUGUST 2: In this handout image provided by NASA, the SpaceX Crew Dragon capsule spacecraft, with NASA astronauts Robert Behnken and Douglas Hurley onboard, is lifted onto the SpaceX GO Navigator recovery ship after landing in the Gulf of Mexico on August 2, 2020, off the coast of Pensacola, Florida.

The Group Dragon's return to Earth would be just the second piloted water landing in NASA's commercial crew program since SpaceX started launching astronauts last year. It's just the third night splashdown in space history and the first in nearly 45 years.

NASA is optimistic that the astronauts can be recovered without incident because SpaceX has experience returning and retrieving capsules at night. SpaceX has conducted countless dress rehearsals and invested a significant amount of time performing overnight recoveries, according to NASA spokesman Rob Navias.

When asked why the crew doesn't actually return when the sun rises, SlashGear claims that the time slot offers the best temperature.

The return of the Crew Dragon would conclude a record-breaking crew rotation that required two launches and two landings with four separate spacecraft in just three weeks. The purpose is only to replace the entire seven-member crew of the International Space Station.

Crew-2 commander Shane Kimbrough, NASA astronaut Megan McArthur, European Space Agency astronaut Thomas Pesquet, and Japanese flier Akihiko Hoshide arrived at the station on April 24, Science Times also previously reported. The first stage of the Falcon 9 rocket that launched them the day before also assisted in the launch of Hopkins and his crew, replacing them on the station.

Hopkins, Glover, Walker, and Noguchi, arrived at the station on November 16 and helped Crew-2 astronauts settle in. They also decided to bid the station's seven crew members farewell Saturday evening, floating into their own Crew Dragon for undocking.

The ship's flight computer is designed to fire the ship's braking thrusters for around 16-and-a-half minutes, beginning at 2:03 a.m. Sunday after it has moved a safe distance away.

NASA is expecting the Crew Dragon to crash into the visible atmosphere around 2:45 a.m., rapidly decelerating in a blaze of atmospheric friction protected by a high-tech heat shield.

The spacecraft's parachutes are to unfurl once it is out of the plasma heating zone, allowing the ship to settle to a relatively gentle impact in the Gulf.

A nighttime water landing also occurred in October 1976, when two cosmonauts in a Soviet-era Soyuz spacecraft were blown off course into a wide lake in Kazakhstan after an unplanned descent in blizzard-like conditions following a failed docking. The spacecraft was moved to shore and the cosmonauts were rescued after nine hours of work by recovery crews.

In December 1968, the crew of Apollo 8, returning from a Christmas trip around the moon, made a scheduled, uneventful pre-dawn landing in the Pacific Ocean.

How To Watch The Rare Splashdown Event

Undocking will be shown live on before splashdown and a press conference after the landing.

The splashdown will be broadcast live on NASA Television, NASA App, and the agency's website. You may also watch the splashdown on the space agency's YouTube channel as well.