AR/VR Glasses of the Future Need Not Be Bulky, Bug-Eyed with New Technology

In the rapidly-growing market for augmented reality/virtual reality (AR/VR) entertainment, glasses are being driven towards being more compact and easy to wear. And a new technology could mean a step away from the bulky, bug-eyed goggles we currently have.

A research team from the University of Rochester's Institute of Optics has developed a new technology that could deliver high-quality images with "socially acceptable" framing designs. In their report entitled "Metaform optics: Bridging nanophotonics and freeform optics," appearing in the latest Science Advances journal, researchers describe how they imprint freeform optics with a nanophotonic material called the metasurface. 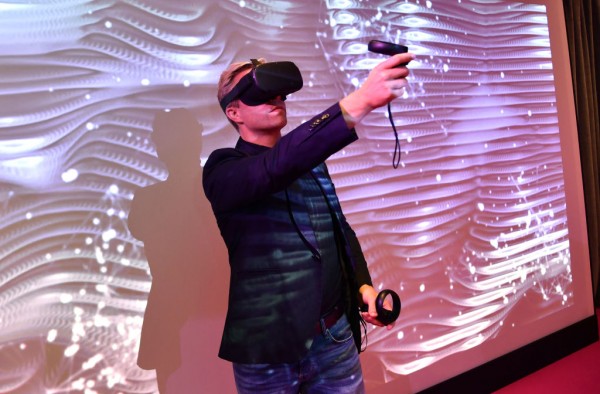 Freeform Optics and the Metasurface

Freeform optics refer to a class of emerging technologies that use lenses and mirrors on a freeform surface - one that does not have a translational or rotational symmetry within the diameter of the surface. This leads to optical devices that are lighter, more compact, and more effective than their more conventional counterparts.

These materials are being used in the latest applications for 3D imaging, visualization, as well as in AR/VR projection, infrared and military optical systems, and lighting solutions. Freeform optics are also being studied for semiconductor, sensing, and medical applications.

This technology is paired with a metasurface - a specially fabricated material containing silver nanoscale structures embedded on a thin metallic film. For the recent University of Rochester study, this silver-lined film follows the freeform shape of the optics, creating a new optical component that the researchers termed the "metaform."

With the new material, researchers now have a potential base for an AR/VR headpiece that no longer follows conventional rules of reflection - it can gather all entering light rays from any directions and it would redirect all of them toward the eyes of the wearer.

In a news release from the University of Rochester, quantum physics and optics professor Nick Vamivakas compared the silver nanoscale structures to small-scale radio antennas. He explains that when they actuate the meta form and expose it to the light of the "right wavelength," these antennas oscillate and radiate a "new light that delivers the image we want downstream."

"Metasurfaces are also called 'flat optics' so writing metasurfaces on freeform optics is creating an entirely new type of optical component," explains Jannick Rolland, a co-author of the study, the Brian J. Thompson Professor of Optical Engineering, and the director of the Center for Freeform Optics.

The first challenge in creating the new class of freeform optics is in using a "freespace optical combiner," which supports the process of directing visible light that enters the AR/VR glasses to the users' eyes. However, researchers found out that when the combiner is a part of the freeform optics that curve following the contour of the head in an eyeglass format, not all light absorbed is redirected to the eye. This required them to find an additional solution on top of using freeform optics.

"Integrating these two technologies, freeform and metasurfaces, understanding how both of them interact with light, and leveraging that to get a good image was a major challenge," explains Daniel Nikolov, lead author of the study and an optical engineer under Rolland's team.

Then, they had to face the challenge of transitioning from the macroscale to the nanoscale. The initial design for the focusing device measures 2.5 millimeters across, but the nanoscale silver structures are now 10,000 times smaller.

To achieve this incredibly fine nanostructure, researchers used the JEOL electron-beam lithography machine at the Lurie Nanofabrication Facility at the University of Michigan.

Check out more news and information on Optics in Science Times.