One of the defining features of the Anthropocene, or the age of the modern human, is the presence of microplastics - and scientists continue to report even smaller pieces found virtually everywhere.

Microplastics are the byproducts of weathering, or through the physicochemical or biological degradation, or the larger macroscopic plastic products, like the packaging and wastes, we throw away and find their way into the ocean. With the new discovery, it appears that the breaking down of plastics will not stop at the micrometer scale, with the scientific community starting to examine the threats that come with its smaller counterparts. Nanoplastics are now found in various ecosystems.

"Numerous media reports suggest, through their sometimes highly emotional coverage, that we are facing a huge problem here," says Bernd Nowack, co-author of a new study from the Technology and Society Laboratory of the Empa-Swiss Federal Laboratories. Together with colleagues Denise Mitrano and Peter Wick, the researchers released their report in the article "Placing nanoplastics in the context of global plastic pollution." The new study appears in the latest Nature Nanotechnology journal. 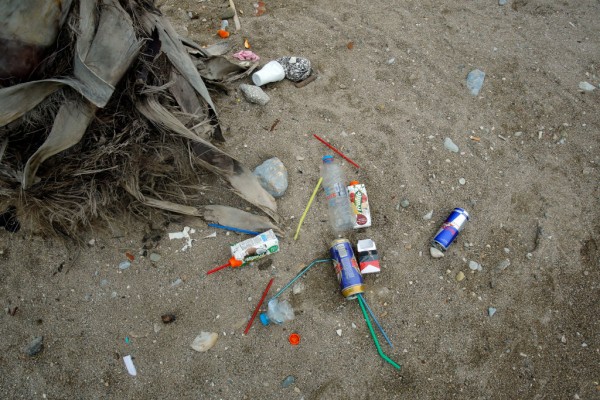 (Photo: Photo by Milos Bicanski/Getty Images)
ATHENS, GREECE - JUNE 26: Plastic garbage lying on the Aegean sea beach near Athens on June 26, 2018, Greece. The Mediterranean is one of the seas with the highest levels of plastic pollution in the world. More than 200 million tourists visit the Mediterranean each year causing a 40% increase in marine litter during summer using single-use plastics including straws and stirrers, plastic cups, water bottles, inflatable pool toys, etc which leads to the general pollution of water and beaches along the Mediterranean.

Addressing the Gaps in Knowledge Regarding Nanoplastics

Nowack explains in a press release that understanding the effects of nanoplastics at present is hardly supported by scientific studies, adding that the community is not aware of how much of these invasive materials are present in different ecosystems.

One of the main reasons for this knowledge gap is in the challenges from existing measurement technology for accurately identifying artificial nanoplastics in environmental samples - identifying them apart from thousands of natural particles of the same size. Mitrano notes that the appropriate analytical methods would first have to be developed before accurately pinpointing them would be possible. Then it becomes a matter of understanding the risks of these small plastic particles to the human body and to the environment, particularly since some of these particles considerably vary in terms of chemical composition.

"So we can't justifiably say we have a serious problem here-but we also can't say we don't," Nowack adds.

Biologically speaking, the smaller these plastic particles become the more chances for these particles to reach organs and tissues that would otherwise be inaccessible to larger particles. For example, the placenta or the blood-brain protects itself from foreign particles by blocking particles above a certain threshold from entering. Wick explains that even if there are microplastics in our food, they do not reach the brain or even our bloodstream. However, with nanoplastics, "we can't be sure."

The Need for Research

Identifying the gaps in existing knowledge and methodologies highlights the need for additional study on the subject of nanoplastics, the researchers noted. However, they are calling for a "cool head" to come with a systematic and broad approach to learning more about the matter. Not all pollutants are as harmful as originally assumed.

"Our society initially adopts a zero-risk attitude toward many things that are new and unknown," Wick adds. But it is understandable, he adds, since after all, people generally don't want plastics in their food.

RELATED ARTICLE: Beware of Sipping: Your Cup of Tea Could Be Filled with Microplastics

Check out more news and information on Plastics in Science Times.