While most songs today are released on the cloud (i.e. the Internet), British rock band Coldplay streamed their new single "Higher Power" from space - in a video call with French astronaut Thomas Pesquet.

The French ESA spaceman talked with the British group live from the International Space Station (ISS).

"We sent you some music, because right now we aren't able to play for anyone on Earth, so we thought we would just play for you," said Coldplay vocalist Chris Martin moments before "Higher Power" started streaming late Thursday, May 6. 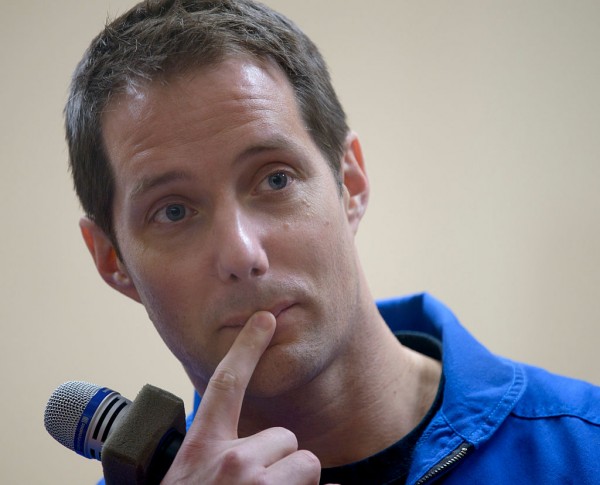 (Photo: Photo by Bill Ingalls/NASA via Getty Images)
BAIKONUR, KAZAKHSTAN - NOVEMBER 16: In this handout provided by NASA, Expedition 50 ESA astronaut Thomas Pesquet is seen in quarantine behind glass during a crew press conference November 16, 2016, at the Cosmonaut Hotel in Baikonur, Kazakhstan. Pesquet, NASA astronaut Peggy Whitson, and Russian cosmonaut Oleg Novitskiy of Roscosmos will launch from the Baikonur Cosmodrome in Kazakhstan the morning of November 18 (Kazakh time.) All three will spend approximately six months on the orbital complex.

ALSO READ: International Space Station Can Be Visibly Seen Soon: Here's How and When to Spot It!

"This is the premiere for the whole... galaxy," Martin added, explaining that the new Coldplay song was actually about finding "the astronaut in all of us, the person who can do amazing things."

Aside from their unique single release, the rock band also asked the ESA astronaut a few questions - including his stay in the ISS as a crew member and how he unwinds in the different environments.

"In the evenings when everyone goes to bed... I put on my headset and play some music and just float... it's really cool, you feel completely free," Pesquet tells Coldplay in their link-up session. Additionally, about how he feels hovering miles above the Earth, Pesquet explains how the experience led him to reflect on how borders "don't exist naturally," stressing the importance of people working together to protect Earth.

The rock band also released the "Official Audio// Extraterrestrial Transmission" on their official YouTube channel, which features the four-piece band performing in an open space filled with holograms of extraterrestrial characters dancing to the song.

The veteran astronaut has served under the European Space Administration (ESA) since May 2009. Prior to becoming a spaceman, the French engineer worked on remote sensing projects for the Spanish multinational GMV as a spacecraft dynamics engineer.

After completing his basic training in November 2010, Pesquet signed on as the youngest of the European Astronaut Corps. His first trip to the ISS was in November 2016 as a part of Expedition 51. Launching from the Baikonur Cosmodrome in Kazakhstan, Pesquet joined NASA astronaut Peggy Whitson and ROSCOSMOS cosmonaut Oleg Novitskiy. His arrival at the ISS marked the return of a French astronaut since Leopold Eyharts joined Expedition 16 back in 2007. He also worked on the European Proxima mission, which covered more than 50 science environment studies for ESA and the French National Centre for Space Studies (CNES). They returned to earth on June 2, 2017.

His recent return to the ISS is under the ISS Expedition 65/66, together with Japanese astronaut Akihiko Hoshide and NASA astronauts Shane Kimbrough and K. Megan McArthur on board the SpaceX Crew Dragon Crew-2 flight. The current expedition and its crew are expected to begin the installation of new Roll Out Solar Arrays - the ISS flexible power source - once these are delivered by another SpaceX flight scheduled in June 2021.