Archeologists found the remains belonging to nine Neanderthals in a cave near Rome, with the discovery offering new insights on prehistoric life in what is now the Italian peninsula.

The discovery was announced by the Italian Culture Ministry on Saturday, May 8, confirming that the Guattari Cave in the town of San Felice Circeo remains "one of the most significant places in the world for the history of Neanderthals." The same site housed the remains of a Neanderthal skull discovered back in 1939. 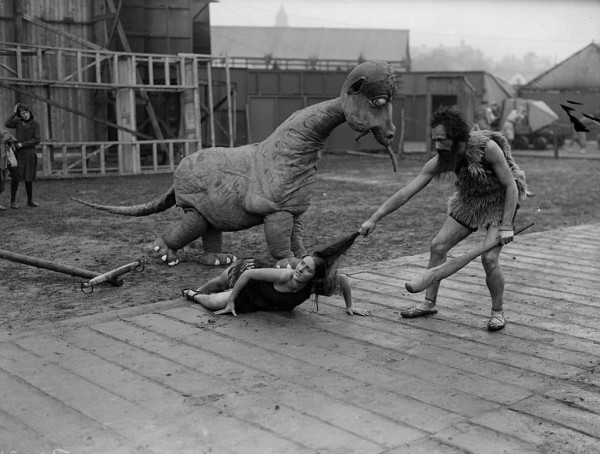 (Photo: Photo by Fox Photos/Getty Images)
10th September 1930: A prehistoric caveman rescues his wife from the attentions of a dinosaur during the Railway centenary and pageant celebrations at Liverpool.

Finding Clues to Early Life in the Italian Peninsula

In the new Neanderthal find, Italian archaeologists discovered skulls and skull fragments, a pair of teeth, and other bone fragments. The oldest among these discovered Neanderthals have been estimated to be somewhere between 100,000 and 90,000 years ago. On the other hand. the other eight believed to be somewhere from 68,000 to 50,000 years ago, according to the Culture Ministry as reported by Reuters.

The Grotta Guattari, or the Guattari Cave, belong to a network of prehistoric caves first discovered about 80 years ago. Its entrance is located about 100 meters from the coastlines of the Tyrrhenian Sea.

Archaeological works in the location began in 2019, which involved previously unexplored parts of the cave. The new location includes a lake first described by the Italian paleontologist Alberto Carlo Blanc, who was also credited with the Neanderthal skull discovery in 1939.

Dario Franceschini, Italian Culture Minister, described the find as "an extraordinary discovery that will be the talk of the world." Additionally, anthropologist Mauro Rubini explains that the volume of the discovery suggests a significant population of Neanderthals in the region, raising the possibility of "the first human society of which we can speak."

They also noted that the cave was able to perfectly preserve the environment as it was 50,000 years ago. Aside from the remains, they also noted finding fossilized animal remains in the cave, belonging to elephants, rhinoceroses, and giant deers, among others. This find sheds light on the plants and animals during at that point in the past.

The Neanderthals are an extinct subspecies of hominids who mostly lived in Eurasia - the lands spanning most of modern Europe and Asia - and were believed to be in existence until 40,000 years ago. No exact reason for their extinction has been confirmed; although there have been suggestions that they were wiped out because they were assimilated into the modern human genome as one of its ancestors, a drastic climate change event, a disease killed them, or the combination of any of these factors.

Despite being one of the prehistoric human species, Neanderthals were discovered to have a more sophisticated technology and culture than previously thought. Compared to the modern human, these hominids were more robust physically and proportionally shooter limbs, believed to be evolutionary adaptations to the colder climates at the time. Other explanations suggest that these features were made for the warmer forest lands that they lived in.

Check out more news and information on Neanderthals in Science Times.